Apple may be developing its upcoming Maps feature in iOS 6 with help from Skobbler, a mobile company that uses Open Street Maps to create its own map applications. 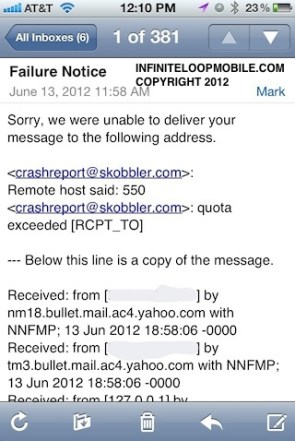 A developer with early access to iOS 6 was allegedly playing around with the maps feature when the app error-ed out, according to a source of Infinite Loop Mobile’s. It showed a splash page for ForeverMap, an app created by Skobbler that is currently for sale in the iOS app store. Skobbler bases its map app on Open Street Maps’ data, the same data that Apple is using in its iOS map function. The company also helps others create applications using Open Street Maps.

The mystery developer claims that upon failing, the iOS map feature sent an error e-mail back to Skobbler, which then bounced back (a screenshot of which can be seen to the right).

If all this turns out to be legitimate, it might mean that Apple is partnering with Skobbler, and the company’s ForeverMap app, to enhance its map features. According to its listing in the App Store, ForeverMap lets you use maps offline, get rich information about a certain location (such as when it opened and who founded it), is available on both iPhone and iPad, and comes in English, French, Spanish and German.

Apple announced the new mapping feature when it debuted its latest mobile operating system iOS 6 at the company’s developer conference WWDC. The maps will come with turn-by-turn navigation, almost anything available in 3D, as well as traffic data. Many speculated that 3D imaging would make an appearance in this map feature, as Apple had recently purchased C3 Technologies, which focused specifically on 3D design in maps.

Those with the iPhone 4S will be able to use Siri to access the maps as well — a useful feature for drivers.

Check out the gallery of Apple’s all new maps below: