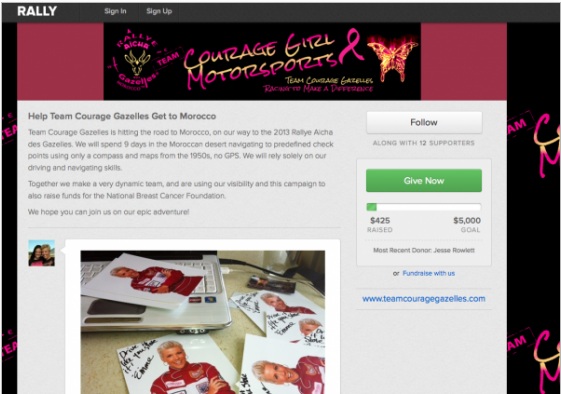 Social fundraising startup Rally.org has raised $7.9 million in a first institutional round of funding.

The platform helps people to rally around causes they believe in. Anyone from individuals to large organizations can share their stories and raise money from the community. The site already has a 1.5 million users and has distributed over 20 million stories.

Rally is based on the idea that fundraising for a cause is more effective when there is a personal story behind it. Cause owners create a profile page and from there can spread awareness, post blog entries, and share photos, videos and links, as well as thank their contributors. By providing comprehensive context for each project, fundraisers can more effectively achieve their goals.

“This is about a core understanding of how causes raise money and how to be the most effective when fundraising from a community,” said founder and CEO Tom Serres. “Causes are driven by stories. It is what people are ultimately motivated by, what ultimately communicates value, and what helps people make their decisions when it comes to a fundraising.”

Rally.org’s forum also allows users to build and maintain meaningful relationships over time, rather than focusing on a momentary goal. It also cause owners the opportunity to engage with their supporters. In some cases the causes are small, like a student raising college tuition or parents soliciting funds to build a playground. However, large organizations and national campaigns are involved as well. Romney for President is a client, as well as the Make-a-Wish Foundation.

Rally is also distinctive because it has its own payment network. All transactions are carried out and monitored on the site. It also provides analytics to help users leverage their stories for greater impact and maximize their fundraising power.

Serres started Rally a year ago. He plans to use the funds to hire engineers and scale the platform, with plans to launch a mobile version and expand into Europe. The round was joined by Relay Ventures, Mike Maples of Floodgate Fund, Reid Hoffman of Greylock Partners, Kevin Rose of Google Ventures, Craig Shapiro of Collaborative Fund, as well as a number of angel investors. The company currently has 23 employees and is headquartered in San Francisco with an office in Berlin.