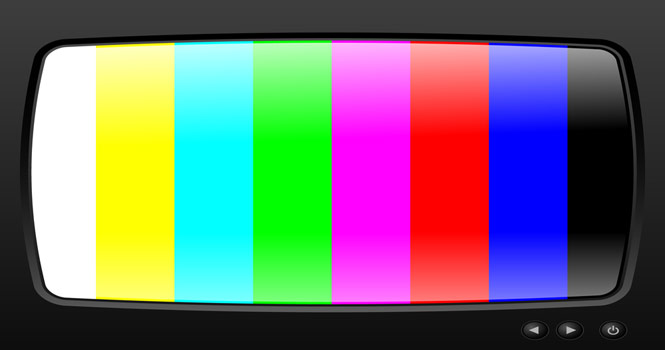 Every year, 100 billion minutes are spent on traditional audio-only teleconferences, while only 200 million minutes are used for video conferencing. Blue Jeans Network thinks it’s the company that can flip those numbers around.

With $25 million in new funding, and a new first-ever-in-the-world technology that allows web surfers to join video conference calls originating in traditional teleconference systems, they might just have a shot. 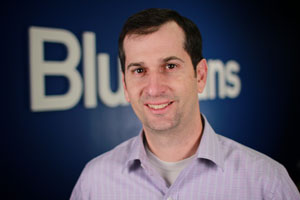 “There are three main problems in the adoption of traditional video conferencing,” Aaron says. Existing solutions, according to Blue Jeans, suffer from excess complexity, incompatibility, and expense.

Solutions that require IT support, or are not compatible with competitors’s videoconferencing technologies, or cost too much are the reasons for the lack of enterprise adoption of video for remote meetings, according to Aaron.

“So we’ve created an interoperable video conferencing service in the cloud,” Aaron told VentureBeat. “Customers get a virtual meeting room, can use any browser to join or create a meeting, and everyone who is invited gets a series of options to join a meeting.”

That’s the key innovation Blue Jeans is announcing today: the ability for browser-based access to meetings, regardless of where they were initiated. Users can join conference calls via Skype, their web browser, classic videoconference or telepresence rooms, Google Video Chat, or Microsoft Lync. 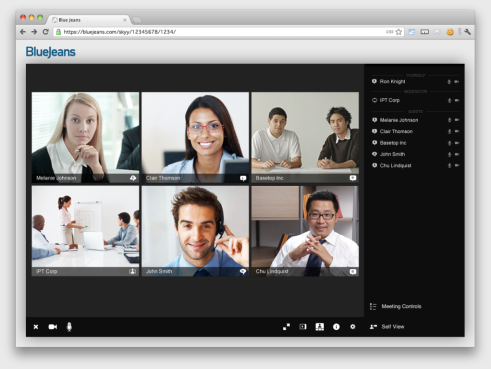 “We are the only company in the world right now with a license to join Skype users to non-Skype users,”  says Aaron. “Not even Microsoft can connect Microsoft Lync to Skype yet!”

In addition, no other solution, the company says, enables users to join video conferences from their browser, even when the video conference is with participants who are using enterprise H.323 systems such as Polycom, Cisco, LifeSize, or Sony.

The desire to connect all possible video conferencers runs deep in Blue Jeans. Aaron explained that with traditional videoconferencing rooms and options like Skype or Lync, about a billion people have the technology and software to participate in video conferences.

“But there’s still billions that don’t. Now you can join a Blue Jeans meeting with a browser — Chrome, Safari, Internet Explorer, or Firefox — and two to three billion more people can join.”

That means that the video that originates in a telepresence videoconferencing room that costs tens or hundreds of thousands of dollars now plays nice with the free browser on a cheap camera-equipped netbook. And soon, with your smartphone as well: An iPhone app will be out in a month that will enable video conferencing on Blue Jeans conference calls. 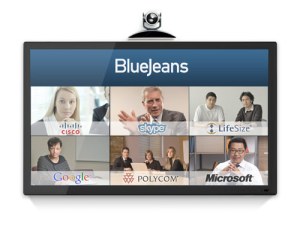 Companies such as Facebook are currently using Blue Jeans, as well as Match.com, the Sierra Club, and Gawker Media. And the service worked well when I tested it.

I joined a meeting by clicking a link on a webpage, which automatically opened Skype. After granting Skype permission to join, I was instantly connected to a virtual conference room. Detecting my low bandwidth — I blame kids and YouTube while I’m in my home office — the service automatically took video but provided only audio, maximizing available capacity.

On the call, we had a company representative just using his browser, another using Skype, and another using some other teleconferencing solution. Everything worked smoothly.

Commercialization of the technology is the company’s next major focus and the reason for the $25 million in new investment from New Enterprise Associates, Accel Partners, and Norwest Venture Partners.

The traditional barrier to videoconferencing has been cost.

Blue Jeans intends to make its technology available with enterprise customers for between 10-20 cents per minute, per participant. That’s close to audio pricing, and it may be enough to convert some companies to video.

Andrew Davis, a senior partner at the Wainhouse Research firm, agrees: “With the addition of browser access, the company is showing how video conferencing may finally become the ubiquitous tool we’ve long anticipated.”

Blue Jeans Networks is based in Mountain View, California, and has about 100 employees. The company has raised a total of $48.5 million in venture capital.