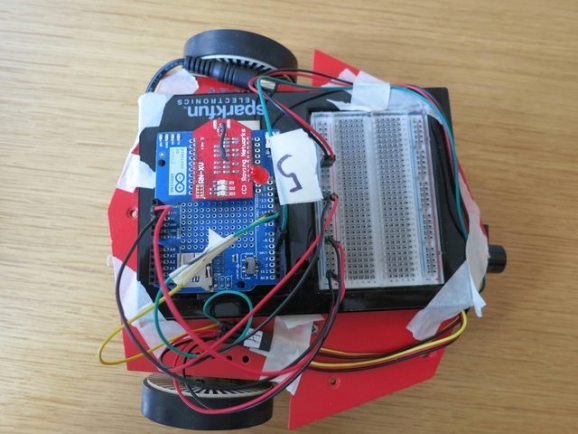 An aspiring hardware hacker at Twilio has used his company’s own telephony APIs as well as Node.js and Arduino to build the charming robot you see in the clip above.

We just about overloaded on developer buzzwords there, so let’s back it up a bit.

The bot was built by Twilio developer evangelist Jonathan Gottfried, to whom we say, nice work, Jon! There’s no quicker way to developers’ hearts than showing them how to build and code a robot, and no better way to evangelize for your company’s software than by using it in said robot in an actually interesting way. Twilio overlords, give this man a raise!

“Robots have fascinated me for as long as I can remember,” writes Gottfried on the company blog. He then proceeds to go into great, and we mean great, detail on how the bot was made “using Twilio, Arduino, Node.js, and the RN-XV WiFly module.”

The result is a robot you can control from your phone’s keypad. The post includes step-by-step images and lots of code snippets.

You might be asking, “Why, why in heaven’s name, would anyone use Node for such a task?” The Hacker News army asked the same thing, to which Gottfried replied, “It was the easiest way I found to set up a simultaneous HTTP server and TCP socket to the bot.”

In the HN thread, Gottfried also said, “The hardest part for me was getting the Wi-Fi module to work,” and, “It’s pretty fun to play with, honestly. Hasn’t tried to kill me yet….”