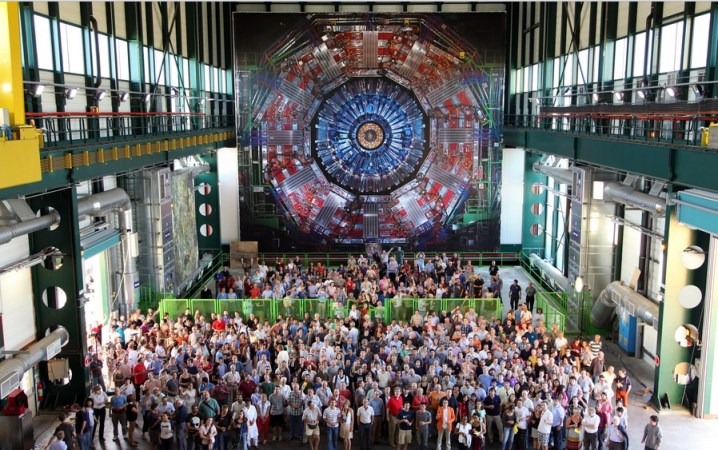 The world of physics is electrified today with the news that a new particle has been detected that is consistent with the elusive Higgs boson, the long-sought after particle responsible for the forces in our universe. Physicists at the European Organization for Nuclear Research (CERN) announced the discovery on Wednesday amidst a throng of Internet chatter anticipating the result. It’s a grand achievement for scientists collaborating at the $10 billion Large Hadron Collider (LHC, pictured), which fired up over 2.5 years ago on the dubious search for the Higgs particle.

Although CERN scientists are hesitant to deem that they have absolutely found the Higgs boson, the new particle is more massive than anything yet seen, a key property expected of the Higgs.

To get some insight into the significance of this discovery, Singularity University asked none other than A. Garrett Lisi, the noted theoretical physicist and independent researcher, to offer his enlightened perspective on what he calls “perhaps the most momentous day in particle physics of the century” and what it means for the future of science. You can see his full response in the video below:

The Higgs boson is the “Holy Grail” for particle physicists because it “is the missing link that provides a description of how all particles get their masses and how they interact with the gravitational field,” said Lisi. “We’ve been trying to get evidence for this Higgs boson for decades now.” Because of its importance to understanding the forces present in the cosmos, the particle has earned the moniker “the God particle.”

During the 1970s, physicists were able to theoretically unify the fundamental forces of electromagnetism and the weak force in what is known as the Standard Model, but to do so meant that force-carrying particles had to have no mass, something that goes against observations. So Peter Higgs and others proposed that an invisible force field permeates the universe and that particles acquire mass when they interact with the field through special particles, called Higgs bosons. No one could know for sure if the Higgs boson was real or not, but without proof of the particle’s existence, an understanding of mass would remain a mystery.

The 17-mile long LHC was built to propel particles to near the speed of light so that, somewhere in the aftermath of their collisions, the Higgs particle might be seen. Today’s news from CERN that a particle with a large mass within the range predicted of the Higgs has been detected is welcome news for the thousands who gambled on a project requiring the most powerful particle accelerator on the planet.

As Lisi said, “Now that we know the existence of the Higgs boson, this is just as significant as finding out that, in fact, atoms do have these hard little nuclei,” a key discovery made by Rutherford almost exactly a century ago in 1911.

The discovery of the Higgs boson is the last piece of the puzzle for the Standard Model, which will now likely be refined with further experimentation and potentially pave the way toward even more unification theories. But for now, science has another toolset — like Newton’s Laws of Motion, Einstein’s Theory of Relativity, and quantum mechanics — with which to study the strangeness and mystery of everything that surrounds us. Understanding of other cosmic phenomena, such as dark matter and dark energy, extra dimensions, antimatter, and string theory, will only benefit from this deeper understanding of subatomic particles and the forces that bind them.

In the video, Lisi points out that, although the ways in which this finding will aid society may not be immediately clear, they will inevitably come, just as they have for other fundamental discoveries in physics. “We don’t know what the implications will be decades down the line from this discovery, but they will surely be huge.”

David J. Hill writes for Singularity University. The university, founded in 2008 and based at the NASA Research Center in Mountain View, California, aims to assemble, educate, and inspire a new generation of thinkers, scientists, and business executives looking to better the world through disruptive technologies.