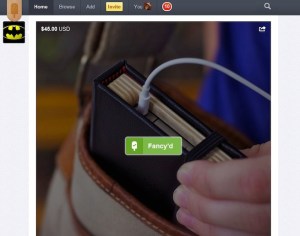 The Fancy, a social photo-sharing site that is New York’s answer to Pinterest, is offering cash rewards to users who share the stuff they love.

Starting today, anytime you share a product that you fancy, you’ll receive a link with a referral code. If a friend discovers an item through your link and makes a purchase, you’ll get a 2 percent cut in the form of credit to your account. You’ll have a dashboard (see below) to track all the purchases made through your links. 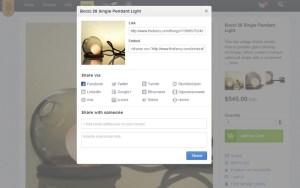 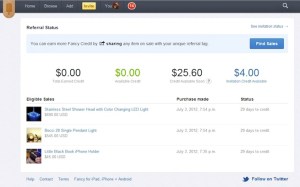 “The goal is to evolve the way social commerce operates,” said founder Joseph Einhorn in an interview with Venturebeat. “We want to reward the users who create value for us by curating their favorite items and helping others to discover great new things.”

If you’re not one of the site’s one million taste makers, The Fancy describes itself as “part store, blog, magazine, and wishlist.” The Fancy has the jump on Pinterest with its store, a recent evolution. In June, VentureBeat reported that users could start selling creations like cookie monster cookies, and lego-head propane tanks on the site. A smart move. Unlike Pinterest, which boasts a significantly higher following, The Fancy actually makes money and fuels $10,000 in sales per day.

The site has a Pinterest-style magazine quality to its design, so it’s easy for users to browse and explore. As a result, The Fancy has amassed over one million users since its launch in August 2011; they fancy 500,000 items per day.

And now, browsing and sharing has taken on a new value for users. Note that the site is not taking its cues from Klout, which rewards users with a large social media following. You will not receive credit unless you recommend an item that someone actually buys, no matter how influential you are.

Einhorn claims that this is a novel approach to e-commerce, as none of the site’s competitors have a similar rewards program in place. Amazon does have an affiliate system, but Einhorn says the retail giant is not a direct competitor.

I disagree. The Fancy is one of the few startups that poses a legitimate threat to established online retailers. The site has the fully functioning marketplace for buyers and sellers and boasts the addictive, social sharing features that have thus eluded Amazon and eBay. According to a recent interview, even Pinterest’s famed early adopter, Chad Syme, can’t resist.