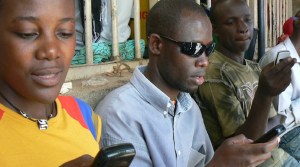 South African startup Motribe is proving that you don’t need to cater to smartphone users to build a million-strong community on the mobile web in under three months.

Motribe announced today that two apps that it launched on Africa’s largest social network, Mxit, have each garnered over a million users. The apps, JudgeMe and MxPix, let people and brands share photos and status updates from any mobile device, including low-end handsets.

The success of MxPix, Africa’s version of Instagram, proves that the magic of editing photos with vintage-inspired filters is universal. In the first two weeks, users uploaded over 70,000 photos and dished out 130,000 “likes”.

The explosive uptake for these apps is unsurprising given that Africa is the fastest-growing and second largest mobile market in the world. The most popular handset is a low-cost slider phone like a Samsung e250, which in the past, has deterred application development on mobile.

Motribe is a high-performing mobile social networking platform that’s designed for users in the most rural parts of Africa and India. The Cape Town–based company launched in 2010 to take advantage of the growing market in Africa — a “mobile-first continent,” according to founder Nic Haralambous.

The founders told us they developed and marketed the technology with less than half a million dollars in seed funding — an impressive feat. The vision? “We wanted to empower users in the emerging markets who can’t afford smartphones and can only access the Internet using a mobile phone,”  Haralambous said.

Haralambous explained that he was inspired to start a company to give local people the capability to blog, share their photographs, and connect using feature phones. He noticed that communities in his native South Africa like to congregate around specific topics and shared interests, like a soccer team or church group.

Cofounder Vincent Maher said the idea to build a mobile web platform was validated when he set up a small mobile community for his wife, and they made a profit from it within two months.

There is a huge opportunity for brands to reach an under-served market of a billion people. Already, Motribe is seeing competition encroach on the space from the likes of Netbiscuits, Mobify, and GoMobi.

“Motribe’s focus on connecting this demographic and building tools exclusively for them provides users, brands, and businesses across the globe with the ability to reach the mass market across a multitude of mobile devices,” Haralambous said.

Mobile in Africa image via Kiwanja