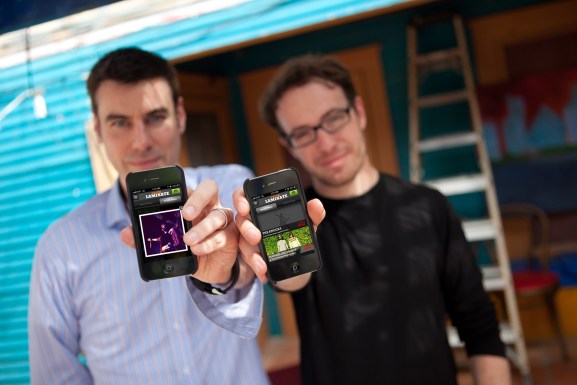 Terms of the deal weren’t disclosed. Two of Rexly’s cofounders are joining Live Nation and opening up a new LN Labs office in San Francisco to primarily focus on mobile, cofounders Joel Resnicow, Kyle Fleming, and Bradley Lautenbach wrote in a blog post announcing the news.

“Rexly is joining forces with Live Nation Labs first and foremost because of shared values and vision,” the Rexly cofounders said. “We are all lean entrepreneurs. We obsess over user-driven design and data-driven decision making. Most important, we are deeply committed to creating phenomenal experiences for music fans, nurturing the music tech community and breathing new life into a challenged industry.”

Rexly is the San Francisco–based, angel-backed startup that makes an iPhone application by the same name for discovering music through friends.

The application connects to iTunes and to Facebook to make recommendations and provide users with a seamless way of sharing the songs they listen to on iTunes with friends who follow them. The approach is not wholly dissimilar from what Apple was doing with its failed Ping social network experiment and also overlapped with Facebook’s music sharing setup.

The deal is the second acquisition by LN Labs. In a prior conversation, LN Labs creators Eric Garland and Ethan Kaplan (pictured above) told me that they formed the investment arm to merge innovative startup culture with Live Nation’s vast ecosystem. The pair are seriously intent on making Live Nation associated with cutting-edge technology and services, and they said they were actively interested in snatching up consumer-facing products that would enhance the before, during, and after concert-going experiences.

“After we started the Labs, but before we’d told anybody what we were up to, Ethan and I started sneaking up north to court Rexly,” Garland reflected in his own blog post. “When we listened and talked, and drank some very fancy teas, we learned a lot about each other’s work and life experiences and the paths by which we’d arrived at this moment. We started to sketch out the place we’d like to build next, the place we’d be excited to come into on a Monday morning or blog about on a Sunday night.”

Rexly’s Resnicow and Fleming are now tasked with helping to make real the utopic vision outlined by Garland. “Labs is a great team of people, and great teams are even more powerful than great ideas or great leverage,” Garland said.

Rexly’s iOS app will remain operational for the foreseeable future.