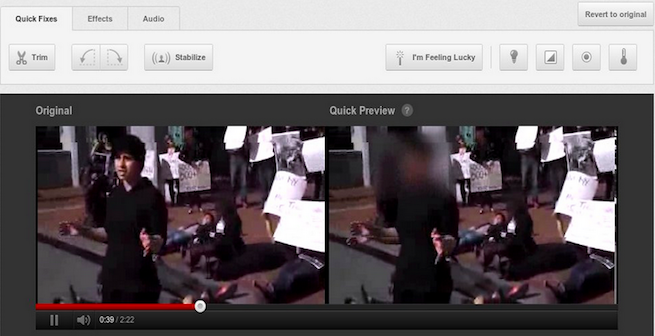 YouTube is rolling out a new tool that will allow users to automatically blur the faces of select people within uploaded videos, the site announced today.

The new tool is expected to enhance the level of protection in videos that may require a degree of anonymity. For example, someone uploading a video clip of protesters during civil unrest in the Middle East can now blur out the faces of people holding up signs in the crowd. The blurring tool could make it more difficult for oppressive governments to target opposition that they’d otherwise harm or kill.

The blurring feature comes just days after a Pew study was released indicating an upward trend of people getting their news from user-generated videos on the site. It also makes YouTube the first video-sharing website to offer such a capability, according to international human rights organization WITNESS’ Cameras Everywhere report.

“Whether you want to share sensitive protest footage without exposing the faces of the activists involved, or share the winning point in your 8-year-old’s basketball game without broadcasting the children’s faces to the world, our face blurring technology is a first step towards providing visual anonymity for video on YouTube,” YouTube Policy Associate Amanda Conway wrote in a recent blog post.

The tool is pretty simple and automatically targets faces with a few clicks. You can preview the blurred faces within the video before its published to make sure everything is correct. I say this because right now you can’t manually select areas that you’d like to blur within the videos.  The YouTube team notes the possible difficulty that the technology may have detecting faces depending on the angle, lighting, obstructions, and video quality. YouTube does, however, point out that this is only the first step in its plan to offer better privacy tools to YouTube users.