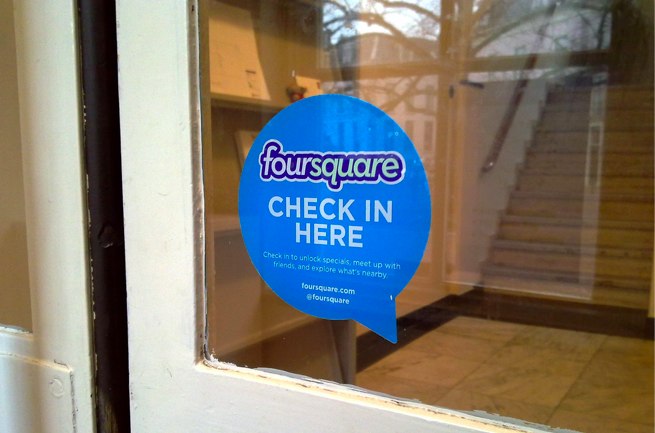 After three-plus years, 20 million members, and 2 billion check-ins Foursquare is ready to grow up.

The social network, which lets users check-in at restaurants, retailers, and other venues, is finally incorporating paid ads into its service, like Facebook and Twitter have done.

The New York-based startup is officially kicking off a pilot period for Promoted Updates, an advertising product that builds on the release of Local Updates to give merchants a way to  reach people who may be in the mood to pop by their stores.

“This is the first time ever that we’re allowing businesses to pay to promote their business in Foursquare,” product manager Noah Weiss told me in an interview. “It’s obviously a very exciting milestone for us.” 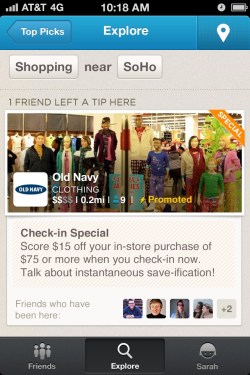 Above: Old Navy promotes a special on Foursquare

Promoted Updates are essentially the paid version of Local Updates, or status updates for business owners, and will run in the Explore tab inside Foursquare’s mobile applications. Foursquare first introduced Local Updates last week to give merchants a free way to disperse specials, share photos, or communicate with their existing loyal customers on Foursquare.

“We’ve been developing these two in parallel for awhile,” Weiss said. “Local Updates are really about engaging with your existing customers when they’re in the feed, when they’re nearby. [Promoted Updates] … are about showing your business more prominently, hopefully with a compelling piece of content, in the Explore tab, which is where our users go when they’re actually looking for ideas for what to do next in the real world.”

During the pilot period, advertisers will work with account managers to pick the updates or specials they want to push to new audiences who will, in a perfect world, be driven to visit their stores — not their websites.

Promoted Updates will run atop Foursquare’s Explore engine, which is the company’s handcrafted mechanism for pointing people to places they may want to visit. The recommendation engine is fueled by member check-ins, tips, “likes,” lists, and so forth. Where you’ve been, where your friends have been, places similar to ones you like, where you are, and what businesses are popular right now all play a part in Explore. 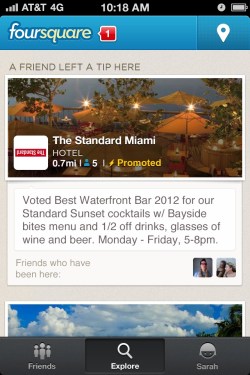 Above: A Promoted Update for The Standard Miami

“Anything that shows up [as a Promoted Update] is using all the algorithms and magic that power Explore,” Weiss said. “We’re recommending you businesses. This isn’t a display ad for an upcoming summer movie. This is: ‘hey, we think you might really want to go to Hertz because you just landed at the airport.'”

Promotional results will be denoted by a “Promoted” label, and Foursquare has set rules to ensure that its users aren’t overexposed to messages and see a good variety of sponsored content while they’re browsing for new venues to visit.

“Mobile and location-based advertising has a great deal of potential,” Altimeter Group digital advertising and media analyst Rebecca Lieb told me. “We’re already seeing national brands such as Walgreens and American Express experiment with Foursquare as a marketing platform.”

Lieb said that Foursquare’s ability to harness behavioral data in addition to location data will be key to the success of the units.

“It’s important to bear in mind that proximity isn’t everything,” she said. “For example, if a user frequently checks into health food venues and never into fast-food chains, promoting a nearby McDonald’s to that user helps neither the advertiser or the Foursquare user experience.”

First and foremost, Foursquare will need to drive its member to use the Explore tab. The company’s mantra of late has been that it’s no longer a check-in service, but a utility that makes the real world easier to use. Now, Foursquare hopes to sell advertisers on its ability to drive people into their stores, a selling point that Facebook’s Sponsored Stories or Twitter’s Promoted Tweets can’t compete with.

But that’s all predicated on the notion that people actually use Foursquare to find new places. Weiss, of course, insisted they do. Usage of Explore has seen twice as many place queries happening since Foursquare released a dramatically redesigned version of its app in early June.

Peggy Gartin, a frequent user of Foursquare’s application and a craft beer connoisseur, said she hardly ever visits the Explore tab. The San Diegan primarily uses Foursquare to check in to places, compete for mayorships, and curate a list of top-notch beer bars. Gartin usually opens the Foursquare application when she’s ready to check in, not when she’s in search of something new to eat or drink.

“I use Foursquare as a way of recording a decision — not making one,” she said.

But Gartin does appreciate Foursquare specials and finds friends’ recommendations an appealing aspect of the experience. If Foursquare were to show her a Promoted Update that featured a business that a friend recommended, sold a product she enjoys, and also included a special, then she would find value in the ad, she said.

Gartin’s remarks shed light on why Foursquare has chosen to limit the release of its ad product to just 20 merchants. Foursquare will use the pilot phase to test the effectiveness of the units, get a reading on what’s resonating with users, and better understand how it can serve national chains and small business owners before building out a self-service platform, Weiss said.

Also still in flux is what and how Foursquare will charge for the units. The standard pay-per-click or CPM models may not be a good fit because Foursquare wishes the ads to drive foot traffic, not web traffic.

“[Foursquare CEO Dennis Crowley] has always said that we’ll do it when we’re ready, and we’ll do it in a way that we think makes for a better experience for users,” said Weiss. “The timing now feels right … the product is in a place where it makes a lot of sense for merchants who want to drive customers into their stores and for users who are looking for inspiration about something to try out.”