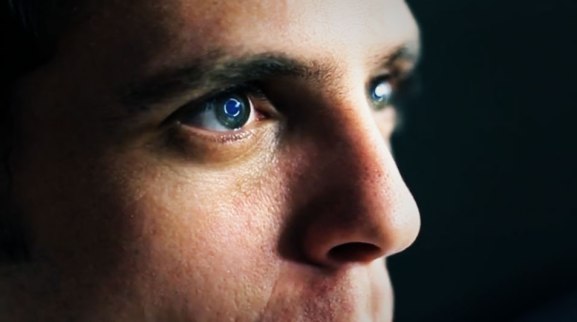 Here’s an amazing eight-minute-long short film we came across. Created by art school grads Daniel Lazo and Eran May-raz as a final school project, the short shows a not-too-unrealistic future wherein we all walk around with contact lens-like devices that connect us to the cloud — everything from games to entertainment to instruction to dating coaches.

“I’m a video game geek and Eran is a film buff, and we both have a passion for sci-fi and technology,” Lazo wrote in an email to VentureBeat.

“At first we were set on making a film that had augmented reality in it. We did some research, delved into every kind of augmented tech out there today, and somewhere along the way we thought ‘Hey, I wonder how augmented reality would be like without the device or apparatus barrier. What if we could just SEE augmented reality?’ So we kind of tried to envision the world and how it would act after this kind of technology is standard, and it rolled on from there.”

As for the Glass connection, Lazo said, “The Google Glass video just came out about a day or two after we started work on Sight. It was pretty cool; it kind of gave us an affirmation that we’re on the right path.”

This augmented biotech future might sound like a utopia, but it has its dystopian moments, too. In fact, parts of this film remind us an awful lot of a certain op/ed on Google Glass and why too much tech is a bad thing.

(For starters, everyone who wears these contacts looks like the bad guy superhumans from this Star Trek: Original Series episode. The bad guys mysteriously develop godlike ESP powers and end up controlling everyone who is less powerful. Is anyone else seeing parallels here?)

And there’s a point where the female character talks about running for exercise and getting lost when her device crashed. Again, it reminded us of a recent Google product, indoor walking directions, that made us question our collective infant-like reliance on technology.

Without giving you any spoilers, I’ll simply say that within every system are vulnerabilities, and having systems that are too close to home means you’re bringing said vulnerabilities close to home, too. And someone, somewhere will always be on the lookout for exploitation opportunities.

As we creep closer and closer to functional wetware, artists and technologists alike are quite right to question how large a role we allow devices and the Internet to play in our lives. This short gives us all a bit of food for thought on that score — and with amazing effects and beautiful video, too.