It didn’t take long for Internet users to transform the successful Mars rover landing into its own meme — with funny images popping up maybe 5 to 10 minutes after the Curiosity mission’s first steps went off without a hitch last night.

Mere moments after the Mars rover’s first image of the planet’s surface went online, Matthew Inman (aka The Oatmeal) had superimposed a vicious Alien within it and shared on Facebook. There were so many Curiosity-related posts (including memes) on community news site Reddit that they actually overpowered the number of cat pictures, which is not an easy task.

Then, this morning, VentureBeat’s Jolie O’Dell informed me that there’s a Tumblr page dedicated to NASA’s Jet Propulsion Lab (JPL) mission activity lead Bobak Ferdowsi, who most people know as that dude with the gnarly Mohawk from last night’s Curiosity mission broadcast. The Tumblr page, appropriately named “NASA needs more Mohawks,” already has eight pages of meme-based content dedicated to Ferdowsi and others from the JPL crew.

The rapid meme creation shouldn’t come as that much of a surprise, especially since meme-maker 4Chan recently announced its billionth post. That said, I was a little surprised at the number of image that were actually funny. We’ve taken the liberty of collecting a handful of the good ones in the gallery embedded below. (And since our Disqus-powered comment section allows for image-based replies, feel free to point out any good memes we missed.)

h/t to Chris “Crispy” Lloyd for the headline 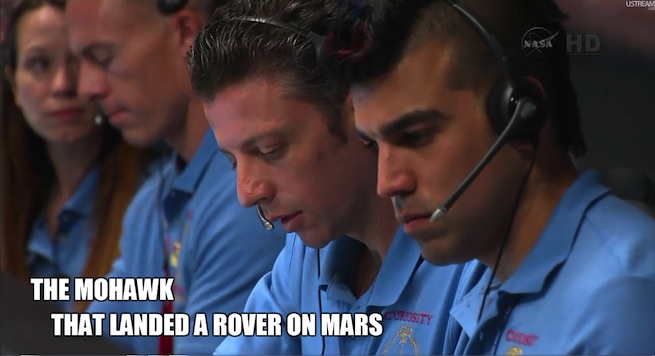