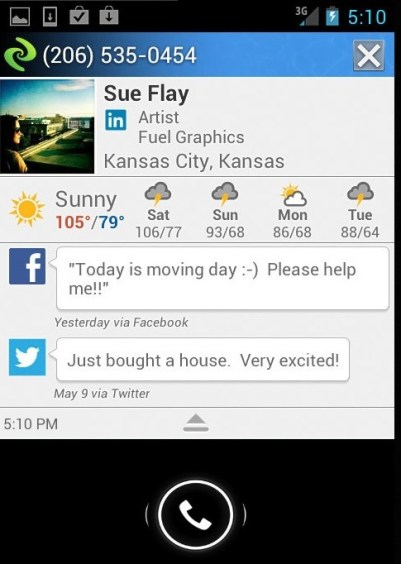 For all of the apps, sensors, and powerful hardware our smartphones are equipped with, they’re still pretty dumb when it comes to making and receiving phone calls. With its latest Android app, Current Caller ID, WhitePages shows us one potential evolutionary path for the smartphone’s calling and texting screens.

Like caller ID on steroids, the app displays social media updates, as well as local news and weather information, alongside a caller’s name and number when receiving or making a call or text. Current Caller ID also offers nifty infographics that chart your communication history with contacts (so you can feel extra guilty about never calling your grandma).

As you can see in the video below (seriously, watch it), the Current Caller ID app takes over your Android phone’s standard call screen to do its magic (something that’s notably not possible on the iPhone). It’s such a simple concept that I’m surprised something like this hasn’t been attempted before. Or perhaps the app is just particularly refreshing since call screens haven’t really changed much since the feature phone era.

Current Caller ID replaces WhitePage’s previous Android app, which simply acted as a Caller ID app for your smartphone. The new app offers all of the same functionality as its predecessor, which WhitePages says has identified more than 700 million calls since it launched in 2008.

I wouldn’t be too surprised if Apple, Microsoft, and Android manufacturers take a few hints from Current Caller ID. The app has the potential to bring us even closer to our family and friends by automatically keeping us informed when it matters the most.

WhitePages has also put together an interesting infographic breaking down just how much we’re buried by communication options these days. Of course, the hope is that Current Caller ID will serve as a relief to the headaches of status updates, unread messages, and cluttered inboxes.