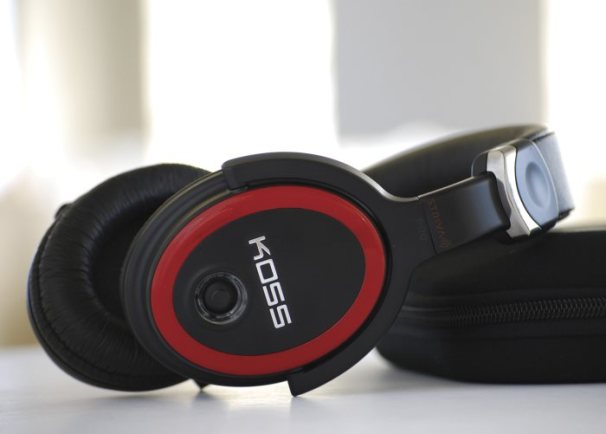 Bulky and heavy by today’s standards, it was compact for a time in which stereo systems were more like furniture. But when Koss showed the player at an audio exposition, audiophiles virtually ignored it, gravitating instead to the true innovation: the world’s first-ever stereo headphones Koss paired with it for demonstration purposes.

In 2010, the Koss company found an old battered 390, literally at a garage sale. The company bought it and restored it. Then earlier this year, John’s son Michael, now chief executive of Koss, connected his father’s first invention to one of his own: the first Wi-Fi-powered internet-addressable headphones available on the market.

He then put a record — one of this father’s favorites, Sinatra’s Fly Me to The Moon — on the turntable, and listened to it in the highest possible MP3 quality, wirelessly. The first true over-the air internet headphones were born.

Fly me to the moon 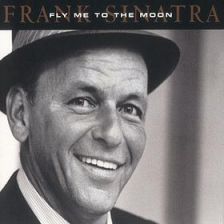 John Koss started the Koss Corporation with a $200 wedding gift that he diverted — with his wife’s permission — to buy 20 broken-down TV sets to refurbish and rent.

But it was only in 1958, when he paired the first stereo headphones with his “portable” music system, that he introduced the world to personal music … sparking a revolution that lives on in the ghetto blaster of the 80s, the Walkman of the 90s, and the iPod of the 2000s.

“Now, we want to deliver that same experience via the web, wirelessly, directly addressable to any individual wearing this device,” says Michael Koss.

The new product is Striva Pro. Koss sent me a pair of the $450 over-the-ear headphones to test — and they’ll be hard to let go after this review is written.

The goal was simple: freedom from wires. All wires. 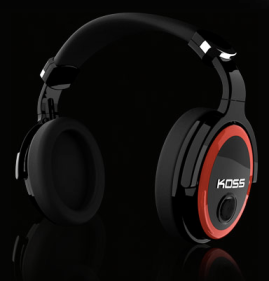 “We’d been doing a ton of research on headphones, and the one thing that came out was a consistent complaint about wires,” Koss said. “While we’ve had wireless solutions since the 70s … infrared … radio … BlueTooth … we wanted to make something that works over Wi-Fi.”

Wi-Fi has become so ubiquitous that the company would be able to ride existing wireless infrastructure practically everywhere. That realization gave Koss an idea.

“When we did that, we realized we could run it in an infrastructure mode, and anywhere those headphones could connect to the internet … they could receive the same data from our transmitter.”

That’s the key innovation behind the Striva Pro.

It means that I can put on the Koss Strivas in my home, connect to my home Wi-Fi, and enjoy any stream of music available on the internet, wire-free. And I can take the Strivas to Starbucks, my office, the gym, or any other location on planet earth with open Wi-Fi and do exactly the same.

The Strivas have a battery, Wi-Fi chip the size of pencil eraser, and a tiny microprocessor all onboard. Everything is self-contained, wireless, and simple.

Rock it old-school and new-school

Or, of course, you can also just attach the Strivas to my iPhone and play music right from there, just like ordinary headphones.

But what if you want to be wireless even when Wi-Fi is not available? Koss has you covered with the ability to stream wirelessly to the Strivas from non-internet sources.

Along with the Striva headphones, Koss includes a content access point, or CAP. Tiny, the size of a book of matches, the CAP  plugs into any headphone jack. Attach your CAP to your iPhone with the included cable, and you’ve just set up a Wi-Fi transmitter. You could conceivably leave your MP3 player in your gym bag, and go work out wirelessly without the need for a publicly available Wi-Fi access point.

“Our chief financial officer puts his phone in his locker and listens to the music in the gym … up to 300 feet away,” says Koss. “We’ve had it up to 500 feet.”

Or you can simply plug the CAP into your computer and stream wirelessly from iTunes, Windows Media Player, or any other app playing sound on your PC.

Frankly, it’s a game-changer: music from the cloud — or your hard drive — straight to your headphones. It’s all of your music plus the infinite variety of the internet, all available without cables.

Koss didn’t spare much with the Striva. In the box you get no fewer than nine components: the headphones themselves, one charger for both the headphones and the CAP, the CAP itself, and a variety of wires of varying sizes for every possible need. Plus, you get a very nice case. 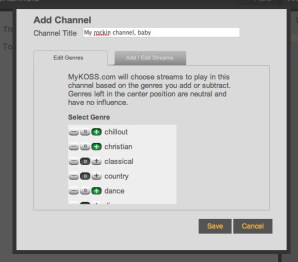 Once out of the box, you pull out the headphones, plug the CAP into your phone, and go to MyKoss.com.

There you walk through a process of syncing the headphones to the CAP and setting up your music preferences, which involves choosing various channels and streams from internet-based radio stations. Channels are groups of similar stations; streams are individual stations.

None of the music originates with Koss: MyKoss.com simply is the handshake that connects your ears with the internet radio stations you’ve selected.

Once you’ve set up your preferences and synced your CAP and headphones, music from whatever channels you’ve selected will flow automatically to your Strivas. It’s not difficult, but it’s not as easy as it could be either (don’t expect granny to do it herself).

Using the Strivas takes a little bit of instruction, something you might not have had to undergo for any other pair of headphones before, due to Koss’ Apple-ification of the user interface: as few buttons as possible. In fact, there are just two controls: a joystick-like uni-button (my term) on your left ear, and a volume control strip. 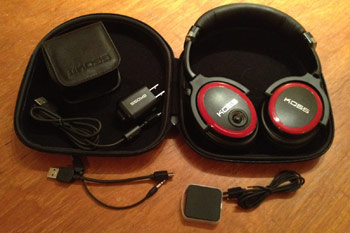 Above: Everything but the kitchen sink …

After a while it’s second nature, but you will be checking the (very good) visual manual more than once.

Volume is a bit of a tricky beast: A long control strip curving up the side of the left headphone. It senses your finger and adjusts the volume up or down as you swipe.

In practice, volume control is a little hit and miss, and you’ll find yourself adjusting up and down multiple times to get exactly what you want. I tried different methods: full finger, fingernail, fingertip. Ultimately, a full finger press moving at medium speed seemed to work best. There’s a definite cool factor, and fewer moving parts mean great reliability, but the control strip is exactly optimal right now.

What about the sound?

And audio quality? I asked Michael Koss about that.

“Like everything else, it’s garbage in, garbage out. We’re dealing right now in a society that’s very used to compressed sound … it boggles my mind that I can walk through an airport see teens sharing ear buds, but people have gotten used to that level.”

In practice, I found the headphones to offer excellent sound — depending, as Koss said, on the audio source. Where available, the entire Striva system scales to the quality of 320 kbps MP3 files. That’s better quality than typical music downloaded from iTunes, which is 256 kbps AAC (a different audio codec from MP3).

“We’re quite comfortable with the product we’re releasing. It’s getting the best throughput you can with that technology,” Koss says. “But if the source material is lousy  … we can’t do anything about that.”

Would I buy them?

$450 is not a cheap pair of headphones. And the earbud versions, which are coming in a few months, are $500 … the cost of extreme miniaturization.

There’s also room to improve. The volume control can be made more reliable, and MyKoss could be made into a platform that, perhaps, tweets songs that you say you like.

But having all the music on the internet in your head is compelling. And the music you love, wherever you go, without wires … I’ve fallen in love.

Perhaps it’s sort of like the Retina Display iPad or MacBook Pro. Once you’ve used it, you can’t go back (but if you’ve never experienced them, it’s hard to tell what you’re missing). Having experienced my music wirelessly anywhere I wanted it, it’ll be hard to go back to cords.

And Koss hasn’t skimped on any components with the Striva: all the connectors and wires you need are right in the box.

So would I buy them? I’d have to say yes.

As Michael Koss says, “It’s an IP addressable end point that you stick in your ear.” Welcome to the future.