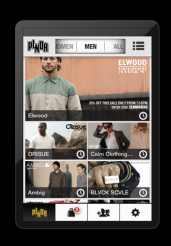 The website is launching its first iPhone app today as it aims to take advantage of its increasingly mobile-focused user base. 30 percent of its traffic already comes from mobile, so creating an app has become a necessity, the company said.

PLNDR, which has 1.7 million users, offers users time sensitive deals on clothes, shoes and a variety of other apparel — often at highly discounted rates. PLNDR is also inherently viral: Users can earning $10 by signing up friends who end up buying something from the site.

The iOS app offers largely the same set of features as its website, with the addition of mobile-only sales and a variety of other “surprises.”

Greg Selkoe, CEO of PLNDR parent company Karmaloop, says that PLNDR wants to do more than replicate the web in an app. “Our strategy is much more involved than just PLNDR on mobile – stay tuned to see what we have cookin’!” he said in an email to VentureBeat.

The app was designed by Xtreme Labs. Inc, which has also created apps for Fandango, Reuters, Vevo, Groupon, and many others.K

The Boston-based Karmaloop is backed by a $35 million investment from Insight Venture Partners.  Launched in 2010, PLNDR earned $16 million last year.