Ever wondered what it would be like to be the President of the United States of America? Kind of like Barack Obama? Well, head over to Reddit because the POTUS with the mostest is doing an “Ask Me Anything,” or AMA.

The President tweeted from his official Twitter account, “Hey, everyone: I’ll be taking your questions online today. Ask yours here: http://OFA.BO/gBof44  -bo”

Indeed, he even signed it “-bo,” which is the President’s official signal that the tweet did not come from an assistant handling his Twitter, but from the man himself.

Reddit’s AMA is a forum for all kinds of people to offer themselves as a sounding board for the many questions people may have about their situation. A number of celebrities including Bill Nye the Science Guy, comedian Louis C.K., and actor Zach Braff have all participated. You can see the top scoring Reddit AMAs here. 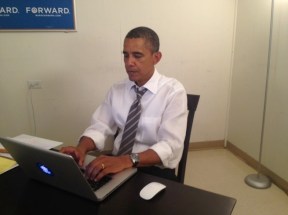 We’re getting reports of people experiencing the “Reddit overload” page, which is to be expected. You think the President’s motorcade causes a traffic jam? Just think of Reddit’s servers right now.

Obama started off the AMA with a not about Hurricane Isaac, which is currently hitting the Gulf and Southeastern regions of the United States. He also included this verification photo, which you can see right, though sadly it does not include a piece of paper handwritten with his name and date on it.

Thus far Obama has nearly 500 comments, many of which are questions about the Space Program. Many others are demanding a better “confirmation” photo from the POTUS.

Throughout his presidency and now re-election campaign, President Obama has taken to technology readily. He not only keeps his Twitter feed fairly lively, but has also participated in a Hangout on Google’s social network Google+. Indeed, in his election campaign, Obama is even accepting donations via Square, the mobile payments dongle that allows small businesses to swipe credit cards via the audio jack in their smartphones.

For all those having trouble getting Reddit to load, check out a few of our favorite threads thus far: