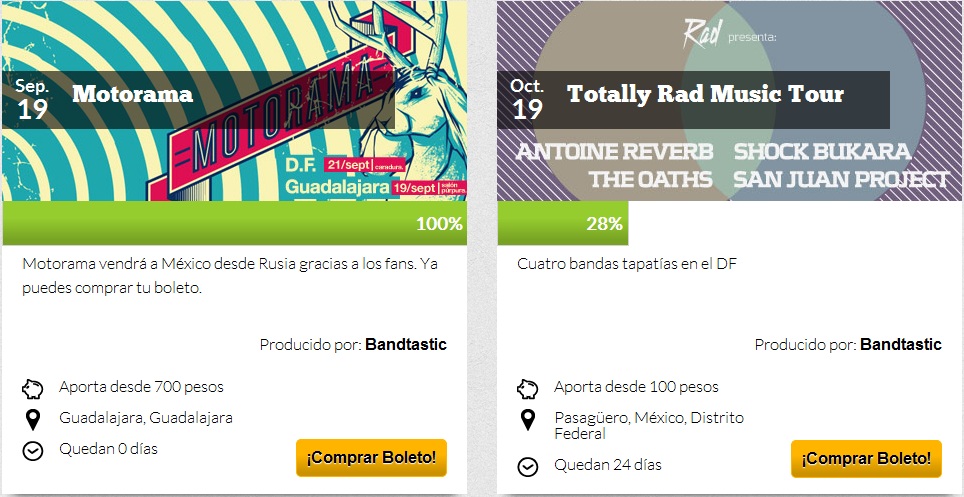 With the recent acquisition of a Mexican venture capital fund by Dave McClure’s 500Startups and the announcement of a new $70M VC fund specifically for Mexican tech companies, investors in the US are starting to see their Southern neighbors in a slightly different light. Startups that would previously have remained undiscovered by VCs in the United States are getting second and third looks.

One company getting a lot of attention in Mexico City and further afield is taking on the music business, making live concerts by previously unknown bands possible using a modified crowdfunding model. That company is Bandtastic.

Bandtastic, which recently pitched at the Mexico City edition of Startup World, funded its first concert in March 2012 and claims to have booked 10 concerts. The Bandtastic approach is not unlike Kickstarter in some respects: A concert is proposed and voted on in Facebook, Bandtastic calculates the expected all-in cost of the concert, and if enough fans buy a ticket, it’s on. If not, customers’ money is returned and the concert doesn’t happen. Venues thus know they will have a full house, bands get paid, and fans get their music.

From there, the company’s model diverges somewhat from Kickstarter. The proposed concerts are essentially curated by Bandtastic. Not only that, but in addition to enabling the concerts by essentially assuming the role of the promoter (for which the company takes a 10% cut), a function it acknowledges as a “necessary evil,” Bandtastic also produces concerts itself, which can quadruple its revenue share, particularly if alcoholic beverages are served. It also upsells products, including items such as commemorative posters, pre-show soundcheck passes, and even meals with the bands.

Unlike the U.S. public, the public in Mexico is still somewhat leery of online payments due to a perception that they are vulnerable to fraud. Still, Bandtastic, which accepts credit cards and PayPal, says its experience is that people will get over their misgivings about electronic payments if they really want to see a band.

The company has a team assembled with experience in the music business and concert promotion, and, crucially, it has support from Movistar, a Spanish telecom conglomerate with extensive interests in Latin America. Its concerts in Mexico City have been so successful that it says it is expanding to Guadalajara. Bandtastic was also recently the winner of the Next Web Mexico Startup of the Year award.

M. Christopher Johnson is an experienced strategy consultant, entrepreneur, investor and writer. He is editor of the Latin America Startup Blog. He speaks Spanish and is based in Mexico City.