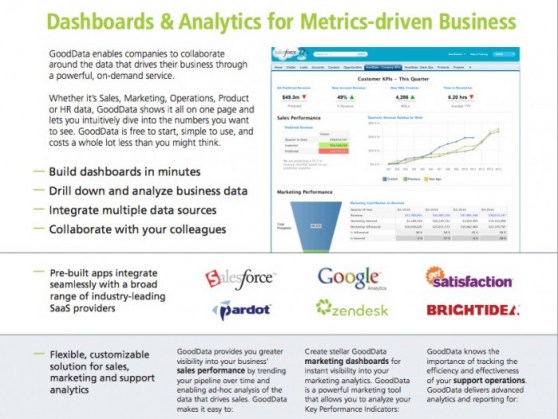 You’ll often hear “big data” startups promising to help companies unlock the true value of their data, but are they delivering?

GoodData, a startup with some heavy-duty venture capital investment, announced a new strategy to take big data out of the hands of IT and into the purview of sales, marketing, and business users.

Above: Roman Stanek, CEO of GoodData.

“You shouldn’t need a Ph.D to use big data,” said Stanek in an interview with VentureBeat. Stanek explained that business users increasingly have sizable budgets to spend on analytics and reporting tools. “The data isn’t in the hands of IT — it’s with Salesforce, Google Analytics, and Marketo,” he said.

With this new direction, GoodData will deliberately circumvent IT. “The only way that innovation gets into the enterprise is through business users,” said Stanek.

The company markets to mid-sized Software as a Service (Saas) vendors, who integrate the technology in their own platforms. The other sweet spot for GoodData is high-tech companies — its customers include Living Social, Groupon, Zendesk, and Pandora. Since the San Francisco-based startup was founded in 2007, over 6,000 customers have signed-on, and it has seen revenue growth of 500 percent year-over-year.

At this point, GoodData’s “BizData Monetization,” as it refers to it, is mainly smoke and mirrors. But with this announcement, the company is rolling out its new “marketplace” product — a library of prebuilt business analytics mashups for sales and marketing teams to create fancy looking, analytics-filled reports.

When the company raised a substantial third funding round in July, it announced it would invest in sales and marketing. It’s paying off. This is a clever marketing move, considering that companies are still in the dark about how to derive dollars from their data. Research firms predict that big data will increasingly be marketing’s problem. According to Gartner, by 2017, a CMO will spend more on IT than the CIO.