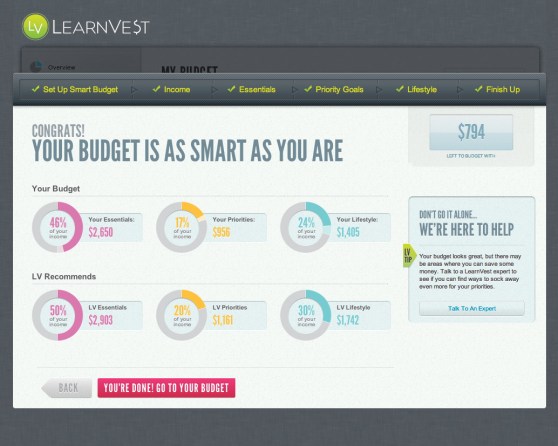 After targeting financial planning for women for the past few years, New York City-based LearnVest is aiming big with its latest update, which transforms the startup from a niche financial planning service to something that anyone can use.

LearnVest announced today that it has upgraded its core Money Center tool and tied it together with its financial planning services, making it easier than ever for financial planners to help you manage your money. Additionally, the company is now a Registered Investment Advisor, allowing its planners to offer investment advice as well.

“I just want to make financial planning really consumable — right now it’s not a consumer product,” Aleva von Tobel, LearnVest’s founder and CEO, told VentureBeat in an interview last week. “Being able to get advice from an expert… it’s a total disorganized process…”

“I kind of step back and look at the LegalZoom’s of the world … everyone needs legal documents … but can we all afford a personal lawyer? No.,” Von Tobel said. “What they did is make getting access to legal documents very easy and consumable, and now they have legal services where you ca actually pay to work with lawyers… So at the high level, there’s an expert intensive industry that users really need access to but can’t afford because barriers to entry have been too high, [we’re] disrupting it by putting in technology and making it affordable and consumable.” 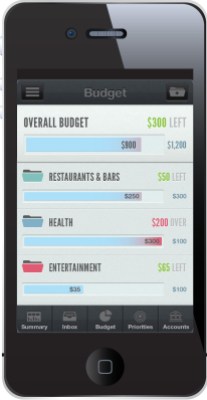 LearnVest is also working on an iPhone app, which should be available in the next few weeks. The app offers pretty much all of the features in LearnVest’s desktop Money Center, and in many ways it’ll be even more convenient. In particular, the company has developed a quick and simple way to enter cash transactions — it’s almost as simple as a Foursquare check-in. Keeping track of cash transactions has been my biggest problem with using money management services, so I’m hoping LearnVest has finally cracked that nut.

The company has also revamped its premium service, which is powered by a team of Certified Financial Planners. Just like LearnVest’s previous offering, you’ll have your own CFP to work with, which could be particularly helpful for those of you with complex finances.

At the high end, there’s the “Portfolio Builder” package ($599 a year), which is geared at people who are ready to invest, but want to avoid the fees of traditional financial and investment planners. It includes everything from the 5-Year Planner package, along with additional help with their investment portfolio.

As part of the upgraded Money Center, LearnVest’s CFPs can also view your accounts live during consultations. This allows the CFP to keep track of your finances without constantly having to catch up on your paperwork. (Think of it like working on a shared Google Doc.) Co-browsing your accounts may seem like a minor feature, but Von Tobel says nobody else in the financial planning is offering anything similar. Currently, the feature is restricted to when you’re on the phone with a CFP.

LearnVest has raised around $25 million from Accel Partners, Rose Tech Ventures, Richmond Management, and others.