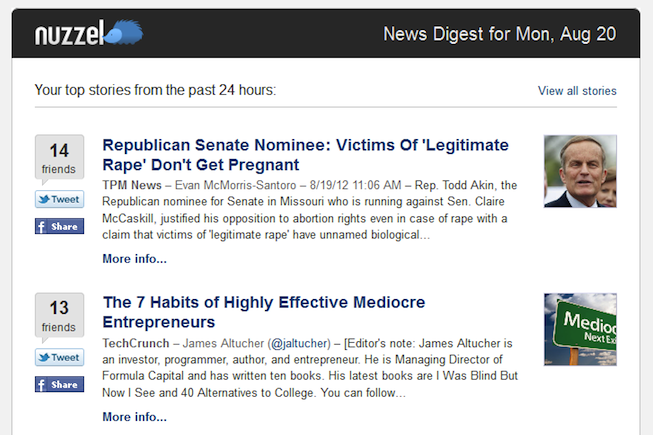 Jonathan Abrams’ new startup, Nuzzel, is a slick, well-designed social news aggregator that pulls together all the hot stories from your Twitter feed.

For Twitter users, the social network has become the ultimate source of news. Abrams, the site’s founder, said that the idea has been brewing for a few years, and he frequently turns to Twitter as a source for tech-related content.

On Nuzzel, you sign in with Twitter, and the site gets to work in seconds, aggregating news that your friends are posting. Most of us aren’t on Twitter all the time, so it shows you top stories that you may have missed. My news feed primarily consists of tech and startup news, as I primarily follow people in industry. In its current form, Nuzzel appeals to those that follow a more diverse range of people on Twitter; they’ll encounter the full spectrum of news.

Abrams, who didn’t raise any funds for his latest venture, developed and designed the site single-handedly. He plans to raise a round of seed funding in the coming months and to recruit a technical team to build out the product.

Social news aggregators are a dime a dozen; Nuzzel competes with News.me (folded into Digg) and Summify (acquired by Twitter), as well as beautifully designed news curation apps like Pulse.me and Flipboard. These startups are direct competitors when Abrams launches its mobile version, no doubt already in the works. For an analysis of the social news curation space after Digg’s acquisition, check out this Wall Street Journal piece.

Still, Abrams says he has a very different vision for the site, “which will eventually become clear.” I have to hand it to him: The site is easy to use and is highly intuitive, very impressive given that this is a bootstrapped effort.

“We all need help managing the overload of social sharing, but we don’t want to miss anything either,” said Abrams, hinting at the future direction of the product. “That’s why Nuzzel matters.” Currently you’ll find a “news you may have missed” section on the site’s clean layout, which shows stories shared by friends of friends, or by the people followed by the people you follow. It exposes you to a broader mix of news.

Abrams won’t have any trouble raising funds for this latest venture. He is the visionary entrepreneur behind Friendster, and he runs the Founders Den workspace with Data Collective‘s Zach Bogue. Prior startups include a social network Socializr (acquired by competitor, Punchbowl), and social bookmarking service HotLinks.