It’s not only in Silicon Valley that tech companies are raising massive sums just months after their public launch.

One of the East Coast’s most promising startups, Duolingo, has raised $15 million in second round funding from New Enterprise Associates (NEA) and existing investor Union Square Ventures just three months after its launch. 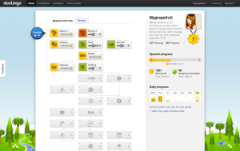 Duolingo, founded in 2011, is the brainchild of Carnegie Mellon PhD student Luis Von Ahn. Von Ahn is the creator of reCAPTCHA and ESP Game — both were acquired by Google. The initial idea for Duolingo was to convince millions of people to translate web content into different languages for free.

The startup isn’t far from achieving its ambitious goal. On the site, you can use the translation service for free (it promises to be more accurate than Altavista, Google Translate, and others) and pick up a new language like French, Spanish, or Japanese along the way. To use the site, sign in via Facebook or Twitter, set up a profile, and you’ll receive a highly intuitive language-learning process.

The Pittsburgh-based company has grown to 15 employees — a bump from 12 back in June. It will use the new infusion of capital to expand its core team of software engineers. In its previous funding round one ago year, the company received $3.3 million from high-profile angel investors, including Ashton Kutcher.

This is the latest in a recent series of checks NEA has cut — the firm raised a $2.6 billion fund in May, one of the largest in venture capital history. Harry Weller, the NEA partner who leads the firm’s early-stage investing practice on the East Coast, will assume a position on the company’s board.