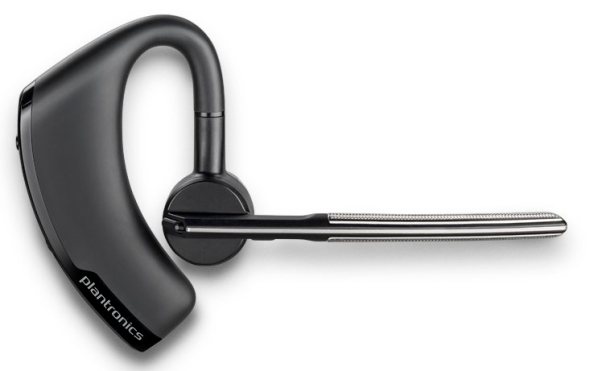 It’s tough to be wowed by a Bluetooth headset these days, especially now that they’re widely associated with obnoxious businessmen who have loud conversations with no respect for the people around them. But Plantronics‘ Voyager Legend, its latest high-end Bluetooth headset, is intriguing enough to break through that stereotype.

Building on last year’s sensor-laden Voyager Pro HD, a headset that was was smart enough to know when you put it on, the Voyager Legend ($99) features three microphones and upgraded Digital Signal Processing (DSP), which makes it the best sounding Plantronics headset yet. The Voyager Legend is also 28 percent smaller than its predecessor, making the once bulky microphone look like a sleek samurai sword.

Also new is the addition of voice commands, allowing you to do things like answer or ignore calls without reaching for any buttons on the headset or your phone. Plantronics has also added a new “Find MyHeadset” feature to the Voyager Legend, which lets you locate the headset using an Android application.

I’ve been testing out the Voyager Legend for a few weeks, and it’s quickly become my favorite way to take long phone calls. Previ0usly, I relied on the microphone built-in to my Etymotics headphones, but that method now feels clunky after I’ve been spoiled by a wireless alternative. As is typical for Plantronics headsets, the Voyager Legend feels comfortable in your ear, and at just 18 grams, it’s easy to forget you’re even wearing it.

The Voyager Legend sounded better than any Bluetooth headset I’ve used so far, and I was also impressed by how natural voices sounded. I also appreciated the new physical mute button, which is particularly useful during extended conference calls.

Overall, the headset screams polish. That’s not too surprising, considering that Plantronics was a Bluetooth headset pioneer. But the level of polish on display with the Voyager Legend is worth pointing out, since the company’s past high-end headsets have been more functional than beautiful. Now, you no longer need to step down to one of Plantronics’ cheaper headsets if style is a concern.

The $99 Voyager Legend is available for sale today. Plantronics will also offer a “Unified Communications” version of the headset for $200 in January, which includes a carrying case with a built-in battery, a desktop charging stand, and a Bluetooth USB adapter.