iPhone and iPad owners who rushed to update to the latest version of Apple’s mobile operating system were met with a number of software surprises, including one they never expected: the inability to connect to Wi-Fi networks. 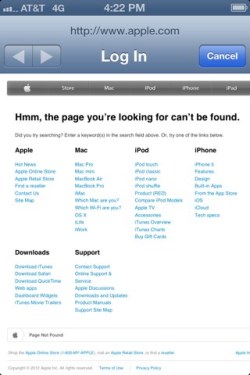 But late Wednesday, users started flooding Twitter and Apple forums with reports that they were no longer able to connect to Wi-Fi networks after they had updated to the new software release.

Affected users who attempt to connect to a Wi-Fi network are shown a “Page Not Found” error on Apple.com, as pictured right. This VentureBeat reporter noticed the issue on her iPhone 4S but was able to connect her second generation iPad to Wi-Fi networks without a hitch.

Apple did not immediately respond to a request for a comment.

Some Twitter users said they were able to reconnect to Wi-Fi after fudging with various settings, including deleting iCloud accounts or turning Wi-Fi off and on again. A network reset or phone restore may also do the trick, according to this thread.

Update #2: A MacRumors poster shared a plausible explanation for Apple’s Wi-Fi trouble. The issue may be unrelated to iOS 6, according to this person.

Here is what is going on. Ever since iOS 4(?) there has been a feature where if you connect to a WiFi network it will try to ping this site:http://www.apple.com/library/test/success.html

If it is a success then it lets you connect, if it is not a success the phone trys to bring up what would be a Login page for corporate wifi networks. Example, public access points that have a login page, etc.

It seems that some moron at Apple deleted the file located at http://www.apple.com/library/test/success.html and that is why it is not working.

This is not an iOS 6 issue but rather a problem with Apple’s website.

Update #1: Several people are tweeting that Wi-Fi connectivity is once again working as usual.