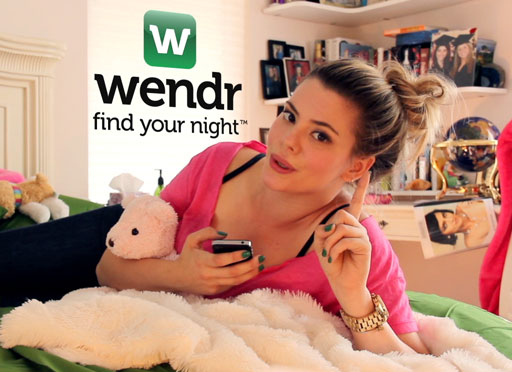 More than 100 startups applied to “Speed Dating for Startups,” a joint competition by Thrillist and Samsung to find interesting new business ideas, but it was the nightly planning app Wendr that stood out from the pack.

Wendr, founded by Sam Zises and Nick Kaye in New York City, allows you to figure out what your friends are doing at night, as well as discover interesting new activities. Other finalists in the competition included Jam in the Van, a music production company, and Florida-inspired clothing brand Flomotion.

After sending in 30-second video pitches (along with all the other contestants), the finalists had to present their ideas to a panelist of judges, who included Thrillist and Lerer Ventures co-founder Ben Lerer, TechStars NYC’s Dave Tisch, and Samsung’s senior manager of integrated marketing communications Jason Redmond.

“When we met with each of the companies we were using certain criteria to judge,” said Thrillist’s Ben Lerer in an email to VentureBeat. “One was how far along the product is and what the roadmap looks like for the future. Wendr was the furthest along and most organized in terms of vision for their brand. Wendr was also the most technologically advanced, which as a tech company ourselves, we found attractive and was something Samsung clearly valued. We also felt that Wendr has the most obvious ways to benefit from the prize pack.”

Lerer noted that Thrillist is “all about covering small businesses” and said he started the competition to promote interesting new companies to his audience. “We believe that over the last few years, with the growing importance of tech and what we think of as the “Facebook Effect,” there’s a real drive towards entrepreneurship, and it no longer just appeals to business people – it’s a mainstream phenomenon.”

Looking towards the future, he said he’s interested in running a bigger version of this startup contest at some point, which could also include pitches for restaurant ideas and event concepts.