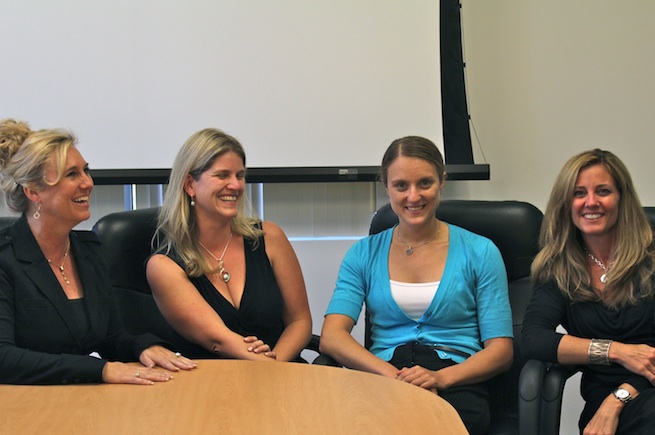 For an enterprise company, Box has a surprisingly young and diverse workforce. It may have something to do with the young, quotable CEO Aaron Levie (a “phenom,” in the words of one exec) — or maybe it’s the lure of the slide that connects the main office to the lobby.

According to Box, a Palo Alto, Calif.-based enterprise startup, 30 percent of its employees are female, and the upper echelons of the organization reflect this gender ratio. This is all too rare in Silicon Valley, where few women are scoring the top jobs at startups. According to the annual study of California Women Business Leaders, tech companies have some of the lowest percentages of women directors and execs.

In an interview with the startup’s top female leaders, I’m reminded of that slogan, “Behind every great man, there’s a great woman.” In Levie’s case, it’s a coterie of women who encourage his long-term pursuits and rein him in during the occasional flight of fancy. Karen Appleton, the vice president of business development, reminds me of a younger, sassier Sheryl Sandberg. In our discussion, the single mother revealed why she made the “financially irresponsible” decision to join an early-stage startup — and, moreover, one that is the brainchild of a twentysomething college dropout. Appleton ran Box’s operations in the early days, scoring the first deals with giants like Dell. Box has also held on tight to top-flight engineer Kimber Lockhart, who came onboard through an acquisition of her company, Increo.

We gathered one Wednesday afternoon for a frank discussion at Box’s Palo Alto HQ about the company’s growth, taking leadership positions in a male-dominated industry, and, of course, the enterprise startups that are spurring the innovation of the next decade.

VentureBeat: Karen, you were one of the first employees at Box, then Box.net, when it was still a small, garage startup.

Karen Appleton: It was February 2007, and I was on a flight to Paris. I read an article in the Wall Street Journal and looked it up online. I thought it was supercool. That’s how I got connected with Aaron.

I was the first female employee and the first nontechnical hire. I have seen almost everything.

Above: Karen Appleton, the VP of business development, was Box’s eighth employee.

VentureBeat: What’s your favorite story from the company’s early days?

Appleton: Dylan [Smith], Jeff [Queisser], Aaron, Florian [Jourda] … some of them lived in in a garage, sleeping on mats on the floor. It felt like a college boys’ dorm. There were cases where I would invite over big-name companies, like Seagate and Dell, and there would be balled-up laundry on the floor. I was a single mom. Really, I had no business considering taking the job at Box, but I took a chance.

VentureBeat: Especially when you were up against giants like Microsoft SharePoint.

Appleton:  When Aaron and I raised the Series B round of funding, the market conditions were not great. I remember when our blog post came out, “Enterprise Software is Sexy Again” [a TechCrunch guest article that Levie wrote], we had this “David and Goliath” mindset. We would take to anyone who would listen about business software. “B2C” [business-to-consumer] was so cool, “B2B” was just, well, meh. We wanted to say that business-to-business is actually blowing up. There is so much innovation here!

VentureBeat: Today, Box is working with some big-name customers like McAfee, LinkedIn, Volkswagen, and The Gap. How did you land your first big fish? And how have you adapted for the enterprise?

Whitney Tidmarsh Bouck: Procter & Gamble was our first marquee customer. They started working with us five years ago, and they were just using us in one small division. Last year, they bought a total of about 20,000 total licenses, with plans to expand more globally downstream.

VentureBeat: Kimber, you started a company before you joined Box. Have you felt the urge to do another?

Kimber Lockhart: When I joined, I was the seventh or eighth engineer at Box. My company, Increo, was acquired by Box in late 2009 after we took funding from Draper Fisher Jurvetson. I found more full stack engineers, a rare breed of programmer capable of doing server side and web work, and now run a team. It says a lot from a talent perspective: I’m a female CEO, engineer, out of Stanford, raised money, got acquired, came to Box … and stayed. Box is a true meritocracy. You can be blonde, female, black — we don’t care.

VentureBeat: Is Levie one of the reasons that Box has been able to attract young talent?

Jen Grant: We can hire fresh-out-of-school grads. Coupled with the experience of those of us who are a little older and have been around the block, it’s that wonderful combination of crazy big thinking and baggage!

Appleton: Aaron has good big-picture instincts. It’s been a really great direction for us to move the company in. He’s not as much wrong as much as he needs to be tempered sometimes.

Lockhart: From an engineering perspective, we have debates on an ongoing basis. How can we be stable and secure like an enterprise needs? Aaron is a phenom, an unusual animal.

Grant: There were many times in the history of Box where we could have settled. We could have been an FTP replacement. We could have gone to the niche of legal or construction; we see a huge market there. Aaron always said, “No, we are the world’s content. I want to replace SharePoint.”

VentureBeat: How would you sum up the culture at Box?

Tidmarsh Bouck: We are a little bit sassy, incredibly smart, a little wacky. We make sure the culture scales,and the people we hire augment the culture. It comes down through every manager in the organization. Every engineer is evaluated on a cultural scale, and we have said no to technically brilliant people that don’t fit.