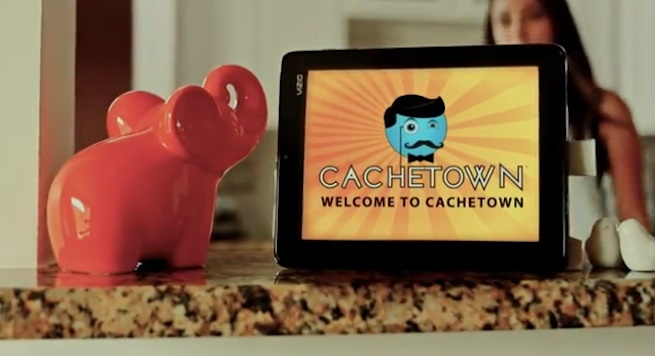 Cachetown is a mobile app technology that uses your smartphone’s camera to turn the world into a video game via augmented reality — with lots of advertising potential for brands.

“Think Google Adwords, Super Mario Brothers meets Foursquare and augment that into the real world by location,” is how the company behind the service, Candy Lab, describes it.

The idea is that if you can create a game or some sort of incentive, you can use the world as a backdrop for advertising and promotional marketing. Sort of like putting up billboards and “coin boxes” whereever you point your camera. The service, the startup says, is perfect for events or location-based activities because it provides a level of interactive marketing that isn’t currently available through traditional advertising.

“When I first saw it, I thought ‘Wow, this is a great application for Google Glass,'” said Googler and startup guy emeritus Don Dodge in his onstage review of the startup at DEMO.”But I don’t see people walking around and holding their phones up.”

Andreessen Horowitz partner Frank Chen chimed in, saying, “I was at Disneyland and I saw a woman walking down Main Street holding up an iPad. She ran straight into a telephone pole.”

Those issues of form factor aside, Dodge concluded, “I think the first use of it will be location-based games. But eventually, location-based ads and prmotions will work very well.”

Founded in 2010, the San Diego, Calif.-based company has raised private funding from family members. Candy Labs is seeking to raise a $1.5 million funding round to help build out its Cachetown service. Check out the demo video below for a closer look at the service.

Cachetown is one of over 75 companies chosen by VentureBeat to launch at the DEMO Fall 2012 event taking place this week in Silicon Valley. After we make our selections, the chosen companies pay a fee to present. Our coverage of them remains objective.