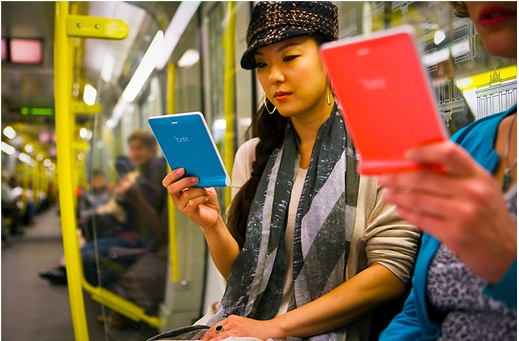 Whether or not a small screen – 5 inch, E Ink – is the best option for reading is up for debate, but the expected price is definitely as good as it gets. Txtr’s Chief Commercial Officer Thomas Leliveld said he expected the price to be as low as €9.90, some 10 times cheaper than other players in the market.

The device – “designed simply for reading” – has no ability to connect to the Internet (as Publishers’ Weekly reports). Rather, new books are added by connecting it to a smartphone via Bluetooth then using the Txtr smartphone app (available for Android, with iOS up next).

It runs on two AAA batteries, which will give life for over a year (assuming we’re reading 12-15 books per year under “normal use” conditions).

Today’s announcement, delivered at the Frankfurt Book Fair, is an intriguing new direction for Txtr, founded by Christophe Maire (an early-stage investor in such Berlin startups as SoundCloud, Amen, Gidsy, and social reading platform Readmill).

So far, Txtr – billed as a tech B2B company – has offered “end-to-end e-reading solutions,” including 10 online ebook stores, personal library storage and an international ebook catalog with up to 400,000 titles. The company’s clients can either choose to make the most of Txtr’s branded offerings or partner up for their own “white label” solutions.

The release of the Beagle is part of the same “end-to-end” plan but is intended to be a game changer, providing a device that could allow mobile network operators – such as T-Mobile, one of Txtr’s existing partners – to take a stronger spot in the digital books market.

This will presumably include the option to include the Txtr Beagle as a premium in phone plans, with the company currently in conversations with potential partners in Asia, Europe, and the US. As Txtr said out in a statement:

Weight, size, and battery life do matter for mobile devices. The Txtr Beagle excels in each of them, since it was developed to unlock a new distribution channel that holds tens of millions of active users. Txtr wants the network operators to partner in helping to grow the number of consumers reading digital books, at a much faster pace.”

Txtr’s backers include US-headquartered multinational 3M, which made a “strategic investment” in 2011.