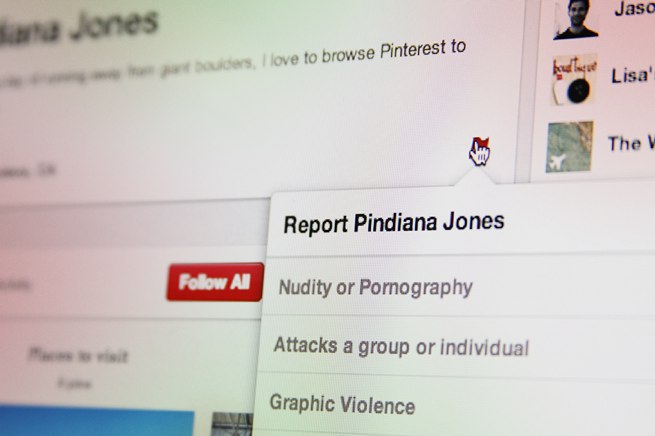 Block away, people of Pinterest. The digital pinning sensation has finally added a feature to help its burgeoning population block unwanted followers from stalking their every post.

Two-year-old Pinterest provides digital pinboard for people to “pin” projects and other interesting things on. The site has attracted more than 20 million members (despite only opening its doors to the public two months ago), which means its also likely attracted its fair share of trolls, haters, and angry exes.

It announced two new features Wednesday to improve and safeguard the experience for its membership: block a user or report a user. Previously, Pinterest allowed its pinners to report content but not people.

Should a member block another user, both parties are prevented from following each other’s boards, liking pins, repining, or commenting. Should someone report another person’s entire profile, the user can specify a reason for the report, such as hateful speech, and an alert goes to the company’s Community team for review.

The new options, rolling out to the web app this week, are accessible from a person’s profile; they’re listed in a menu that appears on click of the flag icon. And fear not, the newly blocked person is not notified of the action taken against them, Pinterest said.

“We care about control because we understand it helps to personalize your experience,” Pinterest software engineer Dannie Chu wrote in a blog post.

Altogether, the improvements amount to incremental changes that seem belated for a site as popular as Pinterest. But for those who want more control (don’t we all?), now you have it.