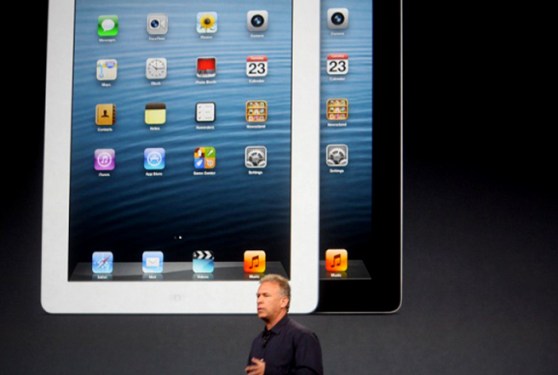 Who needs an iPad Mini when you can have an even better full-size iPad? Apple surprised us with the announcement of a fourth-generation iPad with a fast A6X processor, support for more wireless carriers, and an HD camera on front for video chat.

Apple claims the new A6X chip will double CPU and graphics power. On top of that, the new iPad will feature a better front-facing camera for video calls, faster WiFi, and the new-ish Lighting connector that’s smaller and featured on the iPhone 5.

“The competition wasn’t even close to us, and now we’re just blowing past them some more,” Apple SVP Phil Schiller said at the iPad event today in San Jose, Calif.

On top of AT&T and Verizon offering LTE data, Sprint will now also be able to offer an LTE data package on the fourth-generation iPad.

The full-size iPad will remain the same price as prior generations, with $500 as the base and working its way up to $830.