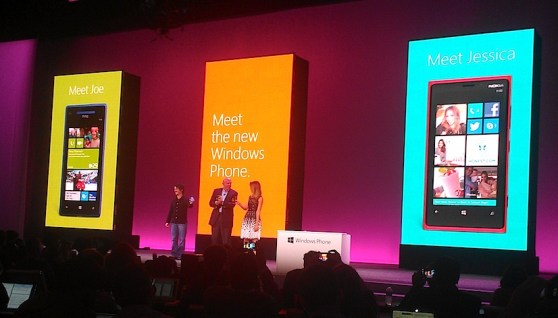 SAN FRANCISCO — Microsoft executive Joe Belfiore showed off the company’s latest mobile operating system, Windows Phone 8, in front of a friendly audience at the Bill Graham Civic Auditorium today. He was joined briefly by actress Jessica Alba and, at the end of the event, by Microsoft chief executive Steve Ballmer, who hawked some of the latest phones and carriers with Windows Phone 8 devices.

Microsoft has been planning this rollout for a long time, and most of its major features are already well-known. But the company surprised us with a handful of cool new features.

Windows has had customizable “live tiles” since Windows Phone 7, which can deliver snippets of custom data, such as calendar appointments and Facebook photos, directly to an app’s tile on your phone’s home screen. Now the company extends that customization to the phone’s lock screen too. Result: If an app supports it, you can customize your lock screen with information from that app. For example, in the new Facebook app for Windows Phone 8, you can have your lock screen display the latest photos from your friends.

Skype will be deeply integrated into Windows Phone 8, Belfiore promised. For instance, you’ll be able to receive chat notifications and Skype calls even when you don’t have the app open. The incoming Skype call screen looks similar to the one for regular phone calls, and you can even use the phone’s call-waiting features to switch between Skype and regular calls.

Pandora has been one of the most glaring absences from the array of Windows Phone apps. Microsoft knows it needs to play catch up, fast. Getting Pandora onto Windows Phone 8 was a real coup — and as a bonus, Windows Phone Pandora will offer one year of cost-free, advertising-free music. It won’t be available until early 2013, however.

Do your kids like to borrow your phone so they can play Fruit Ninja and Angry Birds? Mine too. The new Kid’s Corner feature lets you set up a special login screen just for your kids. It’s got larger, more colorful app tiles, and you can specify which apps, games, music, and videos show up there. To show off the feature, Belfiore’s three kids came onto the stage for one of the cutest tech demonstrations in the history of San Francisco tech demos. His five-year-old daughter bypassed the Kid’s Corner immediately and went straight to the regular homescreen — oops! But once she got to the right screen, she found Fruit Ninja right away.

“I love kid’s corner. I think it’s awesome,” said actress and entrepreneur Jessica Alba, who came onstage briefly to wow the roomful of mostly male nerds and to talk about how much she likes Windows Phone.

Windows Phone now includes a feature that compresses web page data while you’re browsing to make sure you don’t overuse your wireless data allotment. Belfiore said this will enable 45% more web browsing with the same amount of data. Data Sense also helps you find local Wi-Fi hotspots on a map and automatically switches you over to Wi-Fi whenever possible. In addition, when you get close to your carrier-imposed cap, you can have it restrict background data downloads to help you eke out an extra few days.

Microsoft added a new feature to its People hub: The ability to create “Rooms” for groups of people. Rooms are collections of people, but also include a shared, private messaging string; a shared calendar; and shared notes. You can share calendars with iPhone users, but other features are WP8-only.

Windows Phone’s note-taking application, OneNote, now includes a handy voice transcription tool. From anywhere in the OS, press and hold the Start button and say the word “Note.” It will record your voice, transcribe the audio to text, and save both to Skydrive.

Skydrive, Microsoft’s cloud-based storage service, is well-integrated into Windows Phone, just as it is in Windows 8. That means you can easily store photos, documents, and other data on your phone and access it from a PC or Windows 8 tablet (or vice versa). Skydrive automatically stores all photos you take indefinitely — unlike the 30-day limit that Apple’s iCloud imposes.

Although Microsoft had announced it earlier, this is a cool feature worth highlighting: Windows Phone 8 can access all your music via the company’s Xbox Music service. Belfiore said Xbox Music now includes a library of 30 million tracks, any of which you can listen to from your phone or Windows 8 PC or tablet — or your Xbox.

“No other phone works this seamlessly across your phone, your PC, and your home entertainment system,” Belfiore said.