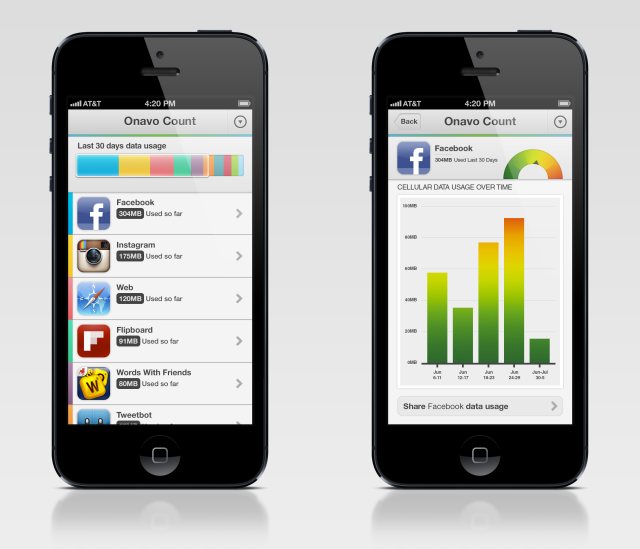 Onavo, the creator of popular data compression apps for the iPhone and Android, has just launched a new app to help you track apps that are eating up your cellular data.

With the free Onavo Count app, you can view a 30-day history of how apps use cellular data, potentially allowing you to discover culprits that could kill your monthly bandwidth limit. For example, maybe you turned on Spotify’s offline synchronization feature by accident, which led it to automatically download hundreds of megabytes of music. Onavo Count should help you prevent those sorts of issues and avoid the associated overage costs with them as well.

There’s certainly no shortage of bandwidth monitoring apps for the iPhone, but Onavo claims that it’s the first to break down bandwidth reporting by app. (I haven’t seen any other bandwidth app that can do this yet either.)

Upon opening the app, you’ll see an elegant breakdown of app data usage for the past thirty days. You can click specific apps for a weekly measure of data usage as well. You can also easily share your Onavo Count results from any of the screens across Twitter, Facebook, e-mail, and text message. The app also integrates with Onavo Extend, the company’s helpful data compression app (which also won top prize at our MobileBeat 2011 startup contest), by showing you how much cellular data Extend has saved for every app.

In my brief time with the app, it’s revealed some interesting tidbits of information. Despite my obsessive Twitter usage, I was surprised to learn that general web usage accounted for more than double the amount of bandwidth (it was right under Apple Services as the top data hog). Onavo Count is also one of the most beautiful examples of data visualization that I’ve seen so far on the iPhone.