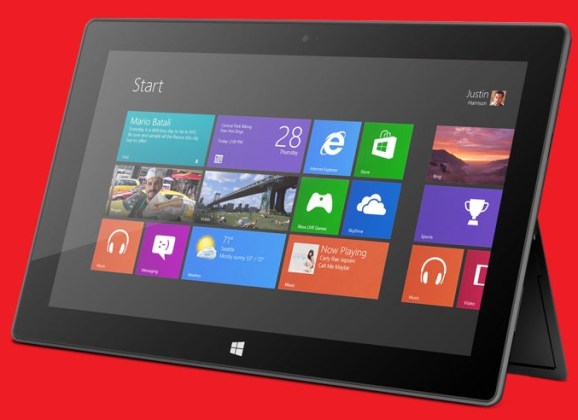 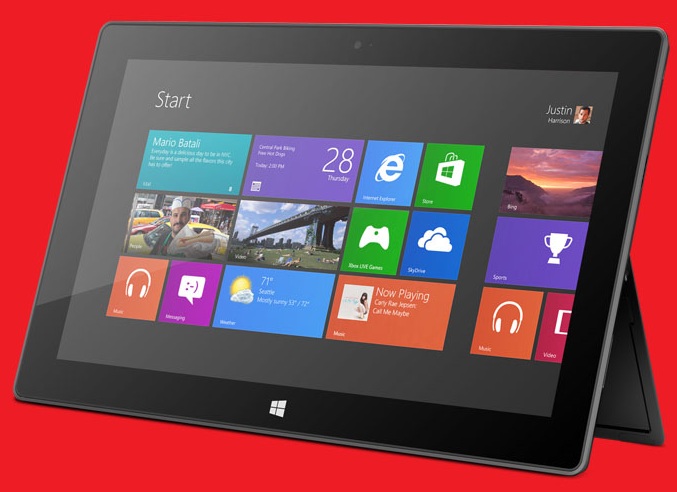 This is a guest post from a developer, Peter Hunter, a senior VMware administrator.

I received my Microsoft Surface RT today. My reason for picking one up was fairly specific. While I admire Apple’s ability to define a new category of computing on the IOS platform, I’ve always felt the iPad experience to be a little lacking for my needs.

I’m that guy who’s in his productivity sweet spot with 20 applications, four Chrome windows, each with 15 tabs, switching between them all, copying and pasting like a keyboard gymnast. I definitely leverage multitasking to get work done.

So using my iOS devices has always been a bit of a downshift.

While I first saw the iOS experience as limiting, I’ve grown to see using my Apple devices as an opportunity to focus. My iPad is my eReader/Netflix/Flipbook/email/game appliance, and it does each of these functions very well one at a time. While the opportunity to focus is a good thing, it’s meant carrying around both my iPad for the tablet experience and my MacBook Pro for the full desktop experience.

So with my MacBook getting closer to a replacement, and with this new class of Windows tablet coming to market, I thought this would be a great opportunity to find out if Microsoft’s vision of tablet could be more than a single-task device. 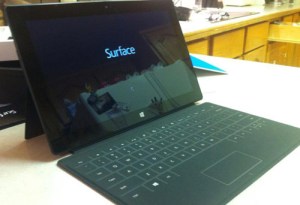 Above: My Surface in my kitchen …

Volumes have already been written about the pros and cons of Windows 8.

So I’ll try to avoid critiques of Microsoft’s design choices where they don’t directly help or hurt my ambitions with this device. I do feel the pain of the Metro-learning curve, but I have the fairly real sense it is temporary. I felt similarly frustrated when I first began using OS X after years only using Windows. That went away quickly too

My initial impression of the Surface hardware is good. My main concern is how the device will wear over years as my primary device. The materials in the device seem to be a good balance of quality metals and plastics. The build quality is solid; the finish seems to be scratch resistant. It seems like Microsoft did its homework.

The kickstand is quite thin and light, yet solid. It is nearly invisible when not deployed, and there’s no sense of it flapping around when holding the Surface as a tablet. The tab you use to pop it out is on the left side of the device. Unfortunately, the power connector on the right side feels like a tab. Several times I’ve found myself pushing on the connector when trying to get the kickstand deployed.

I ordered the Surface with the Touch Keyboard, and I have mixed feelings about it. I find it vastly better to type on than touch-screen typing on my iPad, but I do find myself making strange mistakes. I think the very slight sense of touch feedback is something to get used to. Particularly, I found myself making many typos when typing keys with my pinky fingers. It does seem like this will get better with more use.

I didn’t read the screen resolution specs until after I had used it for a bit. The resolution seemed higher than the specs suggest. The screen is bright and clear. I watched a couple shows on Netflix with darker scenes. The screen performed well.

Battery life seems good. It was at about 80 percent when I first started using it. When I set it down six hours later, it was still at around 30 percent.

I did find a flaw with the design, which in hindsight seems quite obvious. If you use a traditional notebook on your lap while carpooling, or on the train, you will not be able to use this device that way. It is not a laptop. The keyboard and trackpad are fairly useless on your lap. Once you remove it from a solid surface the device really becomes more of a traditional tablet. Depending on how you plan to use this device, I could see this being a deal-breaker. I’m not sure yet what the impact of this will be on my use. It seems like a big deal, but when I think about it more closely, I’m not sure how much I type on my Macbook Pro when it’s not on a solid surface. I think I need a bit more time to understand the impact of this one.

The App ecosystem matters, and to nobody’s surprise, the Windows 8 RT app portfolio has some gaps.

For instance, I had difficulty finding the right app to stream my favorite Internet radio station. I ended up just streaming it through the browser. While I’m sure there are armies of developers coding away right now, I have to evaluate the device based on what’s available now. Specifically for me, a Dropbox App would be greatly appreciated.

I’ve had a few “AHA!” moments, where I’ve realized this device is categorically different than my iPad. The first came when I realized it had Bluetooth and could pair with my Logitech Bluetooth mouse. It might be a small thing, but it is something you can’t do, nor would want to do, with an iPad.

The second came while I was trying to switch between apps. Chalk it up to being a Windows 8 novice, but it was frustrating none the less. I realized the keyboard had both an “Alt” key and a “Tab” key. The combination of the two brought a very real sense of familiarity and another reminder that I wasn’t using an iPad.

The third came when I discovered how to split-screen two apps. Having a Skype chat video window open while composing an email was an eye-opening experience. Something as simple as that should be core functionality on any modern tablet.

So that summarizes my initial experience with the Surface RT. Ideally, I’d like to have evaluated this device after using Windows 8 for a few months. I had to separate the Windows 8 learning curve frustrations from the device’s shortcomings.

That said, I see a huge amount of potential and am quite optimistic this device will fill the gap I have between tablet and laptop.