Facebook’s iPhone app is now sporting features first seen in the company’s standalone Messenger app: now you can swipe left from anywhere inside the app to access your friends and instantly begin chatting. 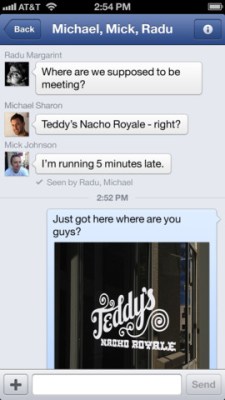 With version 5.1 of Facebook’s iPhone app, which just launched today, you can also add friends to the top of your favorites list and easily share multiple photos. It also adds support for Facebook’s intriguing Gifts feature, which allows you to send real gifts to your friends.

It was only a matter of time before Facebook simplified chatting within its app, even though it’s now accomplishing the same thing as the Messenger application. The new chat interface also lets you easily see if your friends are active.

I haven’t had a chance to try out Facebook’s Gift service yet, but as VentureBeat’s Jolie O’Dell has explored in-depth, it’s a fascinating way for Facebook users to easily bridge their online and real-life personas. We can also thank Facebook’s speedy new app development cycle for seeing an update so quickly after Facebook completely revamped its iPhone app.