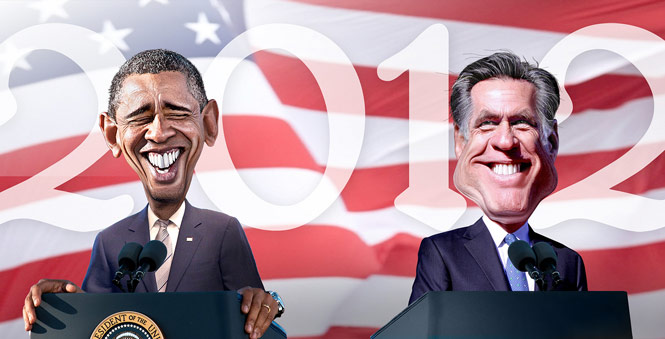 This is a guest post by Corey Christiansen, Social Media Strategist for global digital marketing agency Metia. More details about him below.

If there is one thing that we’ve seen as a constant throughout the 2012 presidential campaign it is that social media has been the go-to-tool for engaging younger audiences and getting them to influence their friends.

There is a lot for marketers to learn from this campaign about engaging large audiences, managing reputations, and instilling passion. Here are the top five things we learned from studying the 2012 Presidential Campaign:

1. It’s all about engagement

Many of the lessons for brand marketers are the same whether we’re looking at presidential debates or some other event.  In an age where content is king, just having fans and followers isn’t enough. It’s increasingly important to know your audience and their preferred method of communication.

As you can see in the graph below, for this election, younger voters were much more likely to engage with political material on social networks (promoting and reposting political materials and posting thoughts on issues). So in order to increase engagement across social networks, it’s important to post content that resonates with this younger age group. 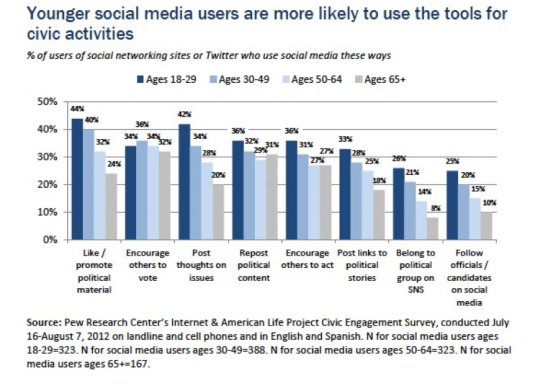 In order to earn engagement, brands need to familiarize themselves with their audience and focus on topics of interest to that audience. 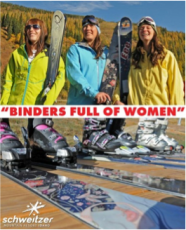 Social media data showed a lot of buzz and activity leading up to and during the presidential debates. Social media allows people to share their passions easily, and politics is one of those topics people are very passionate about.  In the case of the debates, users created their own hashtags, memes, and fake Twitter profiles in response to lines from the candidates. These spread like wildfire throughout social media channels.

Think of ways to tap into the passion of your followers or fans in the social media realm by using a simple catch phrase or hashtag that can be easily shared within social media channels and include those in your ads. 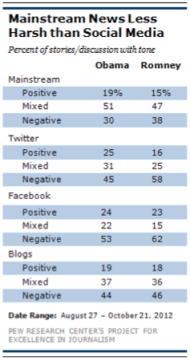 Engage your audience when appropriate, but anticipate criticism beforehand and be ready to play defense. Brands tend to crawl under a rock as soon as they receive negative remarks on social channels.

This year in particular, both candidates have taken a barrage of negative comments on social media sites. In fact, Pew Research stated in a recent article that of all the platforms they studied, including blogs and mainstream news channels, the tone of conversation was the most negative on Twitter. As you can see in this chart from Pew, negative Twitter conversation about Romney exceeded positive by 42 points in the eight weeks studied. For Obama, negative assertions outnumbered positive by 20 points, though it demonstrated somewhat more fluidity from week to week.

Be prepared to rally your supporters to defend your brand from critics and trolls when things get ugly.

Don’t forget the “human touch.” Read your users’ comments, post responses, and be engaged with the community you are building. This community will return the favor by sharing their passion with others. When it comes to data, remember that the machine can’t do it all. Make sure the sentiment analysis makes sense and adjust the numbers accordingly.

5. Don’t waste time and money by attempting to buy your opponents’ fans

While this may work well for some consumer brands, people searching for a presidential candidate on Facebook likely don’t want an opponent to be the first to pop-up in their search results.

Just because you can buy search results, doesn’t mean you should. Confusing people into looking at your content is a desperate strategy to gain fans.

Were there other tactics used in this year’s political campaigns that marketers should avoid using? What other lessons can marketers learn from this year’s elections? Drop your comments in the box below!

About the Author
Social media simply doesn’t work if the content isn’t credible and doesn’t build a real relationship between users. Corey creates and implements social media marketing strategies that produce authentic relationships between consumers and brands. His significant experience creating, managing, and measuring online communities for brands including AT&T, Google, Microsoft, Reebok, Revlon, and T-Mobile has built an impressive arsenal of best practices, measurement tools, and success stories. As a social media strategist at Metia, Corey continually engages with clients regarding social business, building social roadmaps for clients, and delivering action-oriented research and recommendations based on real-world data. Corey received his Masters of Communication in Digital Media from the University of Washington.