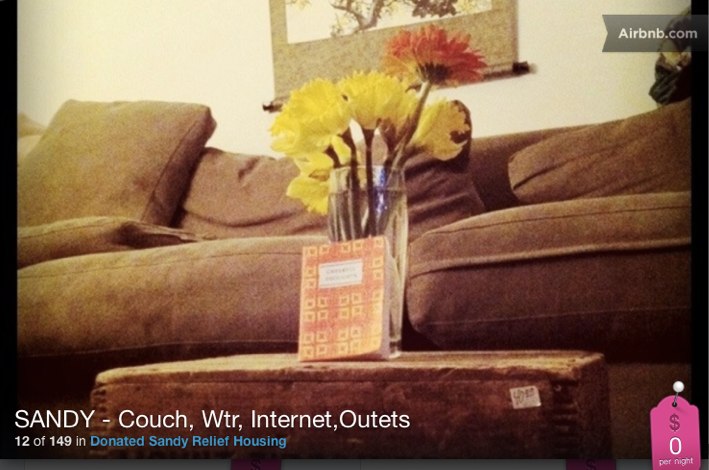 Living up to its potential as a community-powered hotel, Airbnb today changed its policies to allow do-gooders to offer up their spare spaces free of charge to displaced victims of superstorm Sandy.

Four-year-old Airbnb makes a popular web and mobile service for listing and booking couches, rooms, houses, and so forth. Wednesday, the company kicked off a special Sandy initiative in partnership with the City of New York that aims to help people without housing find temporary lodging at no cost.

“There are thousands more people in need of shelter. And there are still thousands of people with extra space. It’s time to come together,” Airbnb’s senior manager of content and social media Vivek Wagle wrote in a blog post.

To help its members come together, Airbnb launched a microsite that gives listers located near Sandy-affected areas the option to donate their spaces. The site also helps Sandy victims locate places to stay free of charge. Airbnb is automatically featuring all donated spaces in a special wish-list called “Donated Sandy Relief Housing.”

Hosts who offer up their spaces are still covered by the startup’s insurance policy, and the company said it won’t collect fees for the listings. So far, more than 200 Airbnb members in the New York area have responded to the call to action and have donated their spare lodging to the Sandy relief effort.

Though officially based in San Francisco, Airbnb’s attitude of community-based aide exemplifies the spirt of New York’s tech scene, which has rallied together to support victims in the storm’s aftermath.