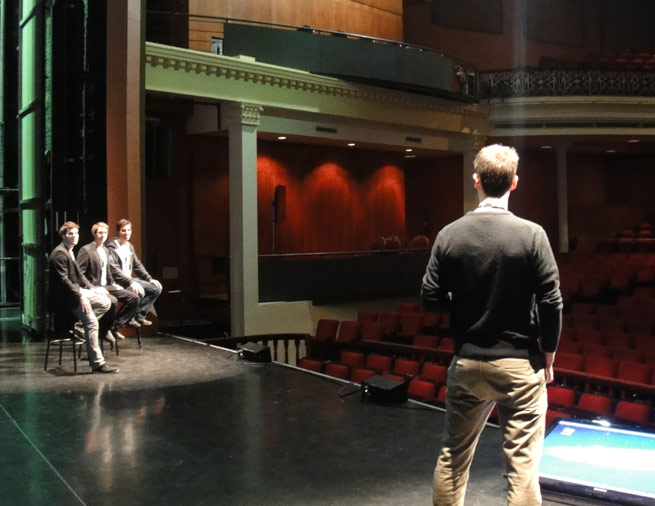 MONTREAL — Everything comes down to this.

Every waking moment of the last three months. All the hopes and dreams of the last few years of your life. And all the thousands of hours you and your team have put into your business idea, your site, your app, your revenue plan. All the hopes and expectations of friends and family, whose lives you’ve essentially dropped out of for the past 90 days.

The next five minutes will determine whether you’ve got a shot at funding — a shot at continued life. You’ve only received $25,000 or so from your accelerator, which has kept you in ramen and Chef Boyardee for three months, but not much else. You need a seed stage investment … $250K, $500K, maybe as much as a million. If you’re incredibly lucky (and smart and hardworking and well-advised and, yes, lucky), you might get as much as $2 to $3 million.

I spent most of yesterday watching FounderFuel’s class of fall 2012 prepare for graduation. FounderFuel is an accelerator in Montréal , Québec that takes small teams with an idea and turns them into a (hopefully) viable startup. It’s the biggest in Canada, and its Demo Day is possibly the biggest in the world in terms of attendance. Last night, 800 people from the technology community gathered to hear the startups’ pitches — a huge crowd for a Demo Day.

Of course, only about 150 of them really matter, tonight. They’re the investors, wealthy angels, fund managers, semi-retired titans of local industry. They have the ability to make your dreams come true — at least for another six months of startup runway. And they have the ability to grind your soul into the grime on the floor with a smile and an it’s-not-you-it’s-us rejection: You’re just not what they’re looking for, they’re investing in a different space, they’re early stage but not that early stage, they don’t get your vertical, you’re interesting but not quite ready …

Here’s the story, in pictures:

Demo Day is being held in the Monument National — pronounced en francais, na-shi-uh-naal — a venerable old thousand-seat theater in downtown Montreal. Aged but graceful, it’s an imposing location for most of the 20-something founders and teams. 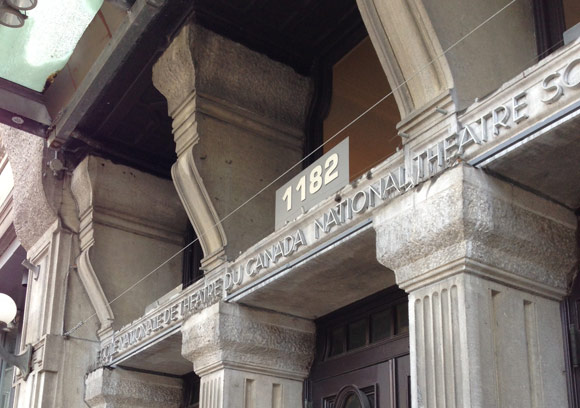 Most of the late morning and afternoon is spent in the Green Room, which has not a trace of green in it. It’s the preparation room, where founders and teams get ready, press interview said founders, distracting them from their task at hand, and, in the showers and restrooms built into the back for generations of actors and performers, get a moment of privacy to think, rehearse, and get their game face on. 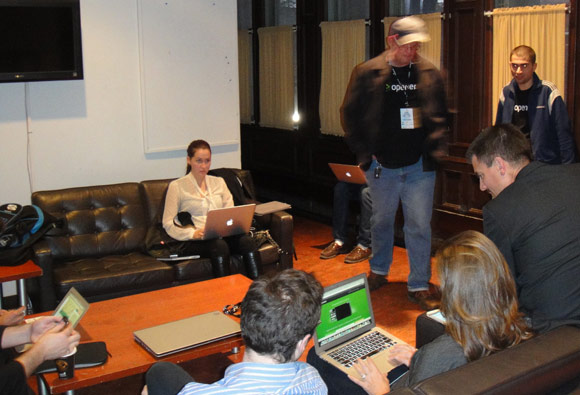 Everyone gets two or three rehearsals of their presentation, live in front of the empty theater. First, however, there’s one last moment to tighten up a phrase, remember a key point, and get nervous about a stage this large.

This is Jeffery Dungen of ReelyActive, a hardware-plus-cloud RFID play, taking one more moment to get it right. 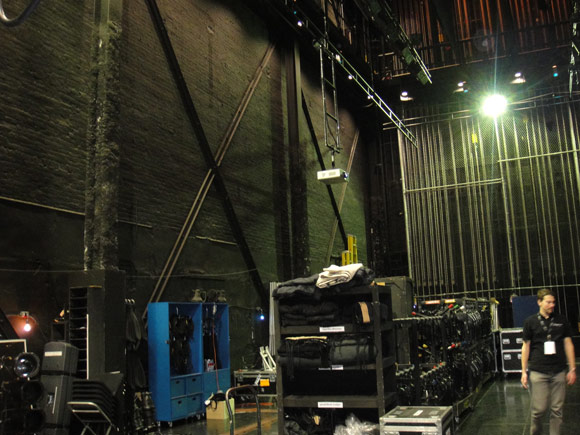 The CEOs have been working on their pitches for a few weeks, but for most, it’s only really come together in the last few days. Now they get a chance to run through the pitch live, with their slides, on-stage. For some, it’s a painful process, with starts and stops as advisors and the mentors coach from the cheap seats.

The key pitch coach is John Stokes, a partner in Real Ventures, which backs FounderFuel, and he’s pleasantly merciless as nervous founders mess up slides, phrases. “Take it from the top” is heard several times, as is “you’ve got it wrong,” and “you’ve got it wrong again.” Some presenters, flustered, take it off-stage to go through their pitches one more time, in blissful privacy.

This is Christian Painchaud, who’s pitching a product customization engine. His team will be on-stage with him, so they sit off to the side. 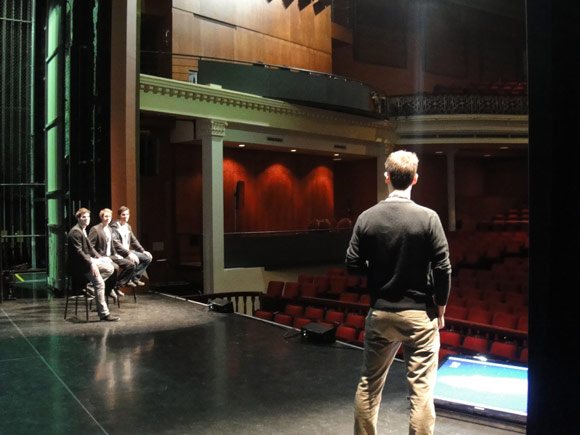 One hour to go

It’s an hour before the doors are opened. Some founders are running through just one more rehearsal. Others peak out at the big empty room, perhaps wondering what it will be like to have 800 people staring at you while you’re trying desperately not to screw up the biggest moment of your young business life. 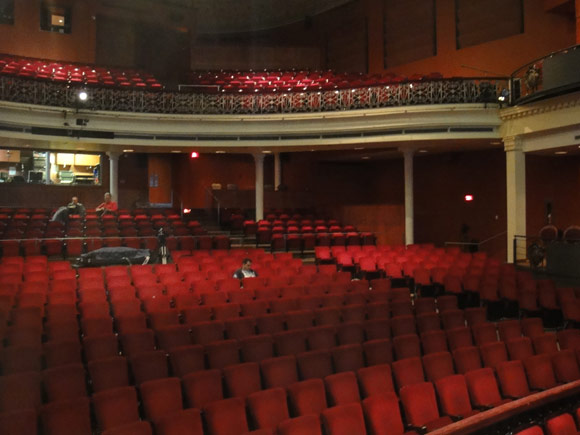 This is not a test

The doors open and 800 or so people start pouring in. They’re loud and fully audible from the green room, where founders are still making last-minute tweaks to their presentations. The arrival of the crowd increases the pressure: This is going to happen soon. 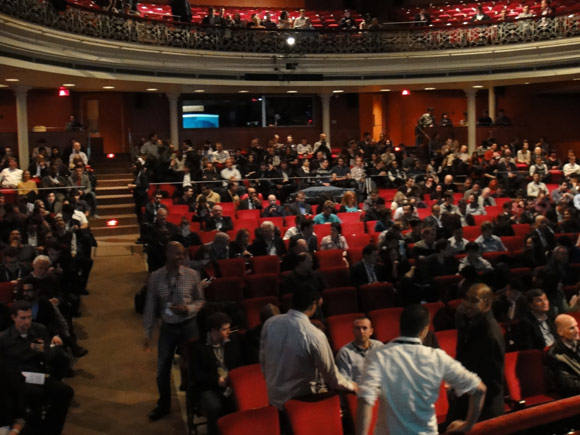 Downstairs is nearly full, so organizers open the balcony. I talk to some of the crowd, most of whom are in technology. Two of them are accountants from BDO, which has been helping the startups with incorporation, filings, and tax planning.

“They have no money,” one of them tells me, “but they still have to file. And they literally have no clue how to do it.”

No money means that helping startups is not a profitable venture for BDO, but they do it for future business development potential, if one or more of the startups gets big, and to be a good member of the tech community … giving something back. 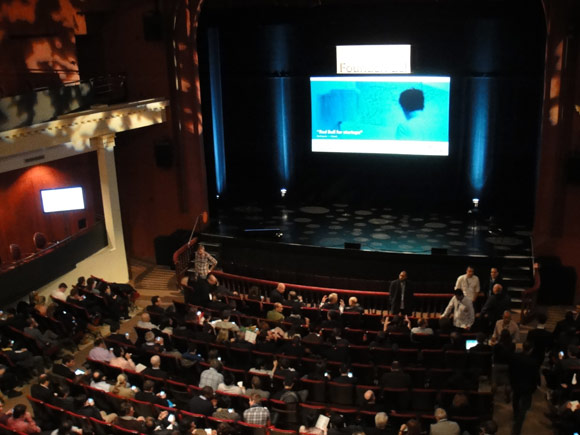 Loud music pumps up the crowd and then Ian Jeffery, the general manager of FounderFuel, jumps up on stage joking about his “lumberjack shirt.” Ian is a veteran of the Valley, having been one of the founders of Radar, which was Instagram but two years too soon. 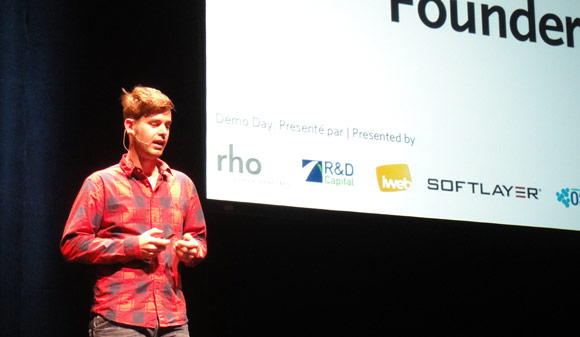 Sponsors get their moment in the spotlight. This is Paul Ford of SoftLayer, which is (believe it or not) an entirely bootstrapped data center, which is currently the largest non-public hosting and cloud provider in the world, with 120,000 servers across the globe.

He uses the F-word, everyone laughs, and we’re ready to go. Later he says that since notorious on-stage swearer Dave McClure wasn’t there to totally shake up the room, he figured he’d pull a Dave. 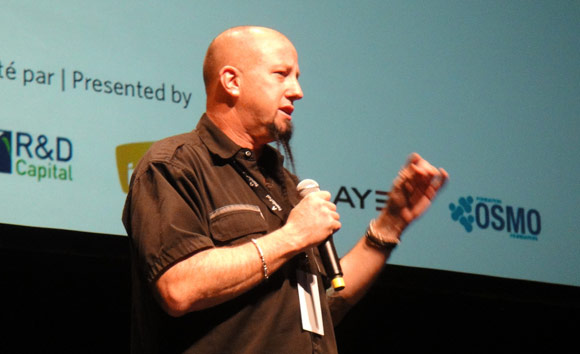 The founders come out and the real show begins

The founders come out. They’re prepped, they’re ready, they’re funky, they’re on … and they are a thousand times better than rehearsals. Everything comes off without a hitch — to the untrained eye that has not seen their slide decks — and each pitch seems better than good.

This is Trina Chiasson of InfoActive, which helps web publishers create live, interactive infographics. I didn’t totally buy her pitch when we chatted earlier in the day, but in the audience, with her visuals, and a calm, cool delivery, I’m buying it now. I mean, even Einstein buys it. 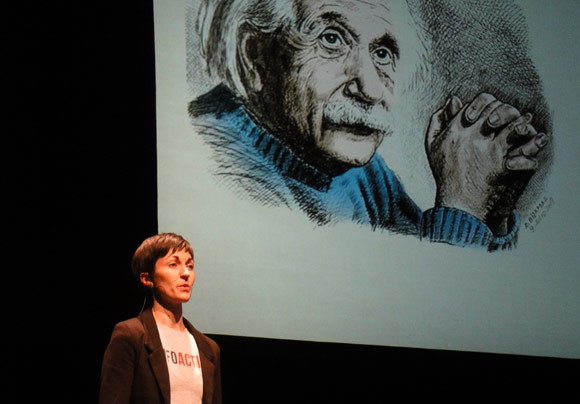 The International Gaming League assaults us

Eyal Toledano of the IGL assaults the audience with a booming heart-pumping video intro showing competitive gamers virtually killing and massacring each other in front of enthusiastic crowds. Then he pitches with intensity, throwing words like UFC fighters throw fists.

The astonishing part is that it works. 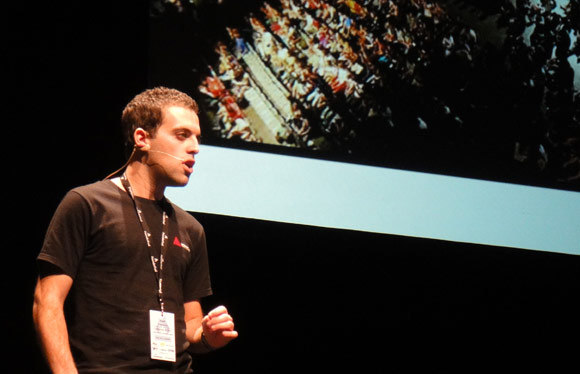 The big numbers come out

It wouldn’t be a Demo Day without big numbers. Most are cautious, but some throw out large numbers ending in billions or millions. Those who do, however, usually have the ability to back them up.

Like Peter Lalonde, of Openera, an automated filing system that helps companies be regulations-compliant without relying on the unreliable (that would be me and you). Lalonde later becomes the idol of every startup present when he signs a term sheet with an investor at the bar in the after-party. 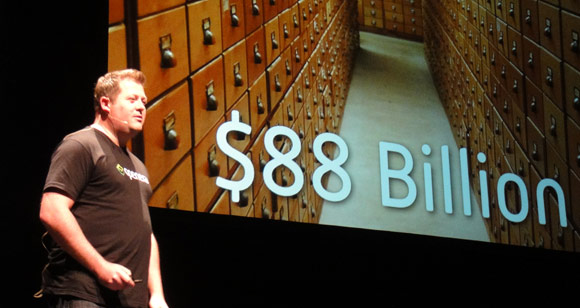 The founder who screwed up most in practice … nails it

Mike Schmidt of LISTN, a sort of social meta-network for music lovers, had the most problems in practice, getting multiple calls from the peanut gallery to start over, rewind, add, edit, and otherwise be different.

In the actual event, he stumbles over maybe one word, nailing everything else. It’s a clutch performance. 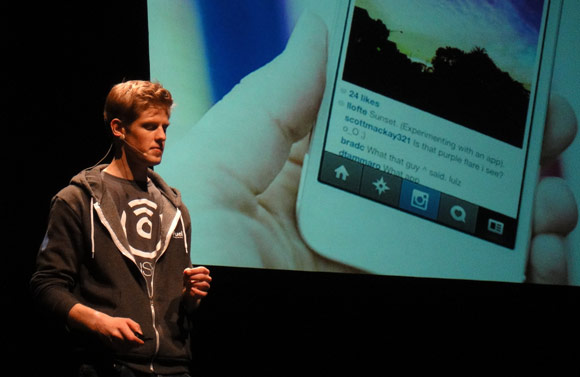 And then it’s over (except for the most important part)

All the founders get up on stage. The audience roars. The founders celebrate. The pitch is over.

Then everyone leaves for the open-bar party downstairs, but the investors and founders head to the VIP room. The founders, moments after nailing their pitches, realize their real work has just begun. Now is the most important part: closing the deal. 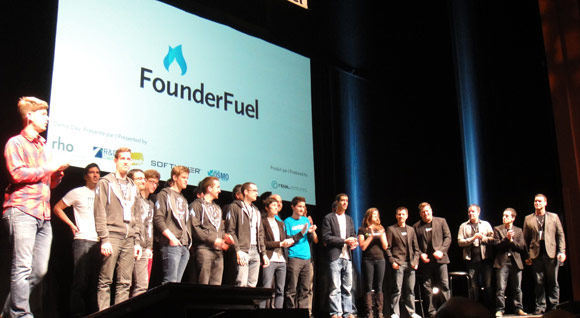 Everyone who could possibly beg, borrow, or steal a VIP pass heads into the VIP room. The beer and wine are free, founders seek investors, and investors — most of whom have had prior contact with the companies they’re interested in — wonder if they really want to throw a half mill at this 23-year-old kid in a hoodie.

In fact, Openera walks away with a beer-stained term sheet signed on the open bar as co-founders high-five each other when they think the investors aren’t looking. The company is the star of a stacked class, with half or more of their $750,000 seed round already committed. In fact they’ve been quietly blowing my mind: the round was $500,000 when I talked to CEO Peter Lalonde on Monday, $600,000 when we chatted again on Thursday afternoon, and $750,000 when his pitch went live Thursday night.

I guess you have to get while the getting is good. 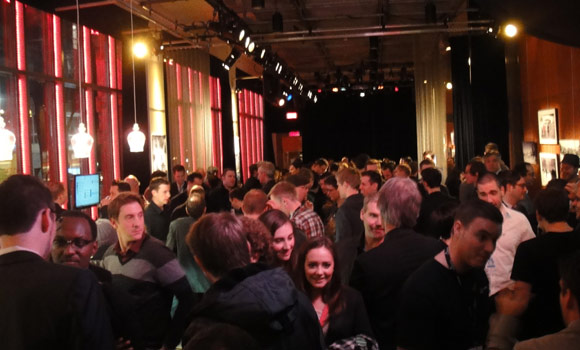 Midnight dinner with the whole cohort

After the VIPs dissipate in varying degrees of dissipation, all the founders and teams and mentors, with a few sponsors, members of previous FounderFuel cohorts, and one sucker-for-punishment member of the press go out for post-pitch dinner at a local Chinese restaurant.

We start getting food at our table at 10:43 p.m., with the main course arriving considerably later. But I’m surprised — and somewhat guilty — to learn when I’m leaving well after midnight that other tables are just getting their mains. Several bottles of wine adorn each table, and by the end of the night, parts of the floor as well. 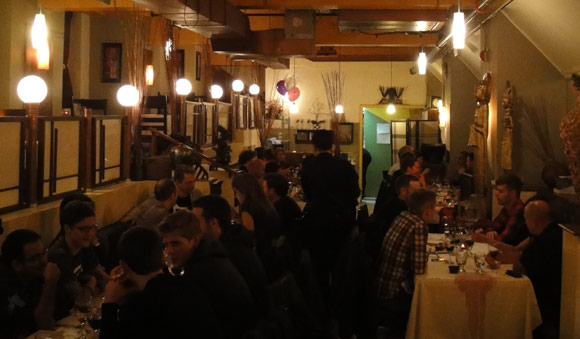 Ian Jeffery gets up to say a few words, and he’s cheerfully booed, inappropriately laughed at, and generally enjoyed. Each class in an accelerator is like a family, a FounderFuel alumnus sitting next to me explains, and this one is starting to realize that after tonight, everything is going to be different.

John Stokes gets up too, talks about shedding a tear while watching the pitches, and says a sort of farewell. 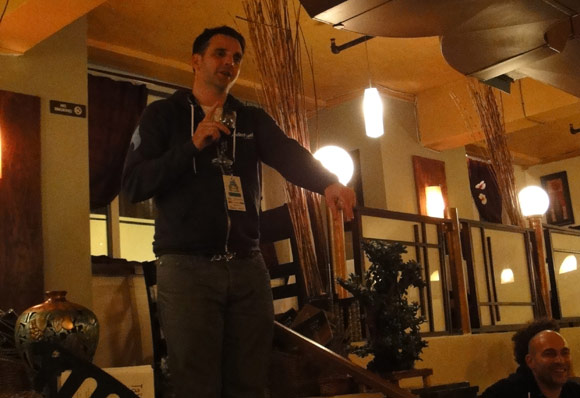 Then the real party starts

The after-party is at a club in old Montreal, and some of the founders start dribbling out to attend it. Having had enough noise and excitement — not to mention beer and wine — for the day, and wanting to let them have some time just with their temporary startup families for one last time, I decide that discretion is the better part of valor and head back to my hotel room.

Demo Day is over. Tomorrow the real work of building a startup begins again, and FounderFuel starts looking for the next group of smart young entrepreneurs.