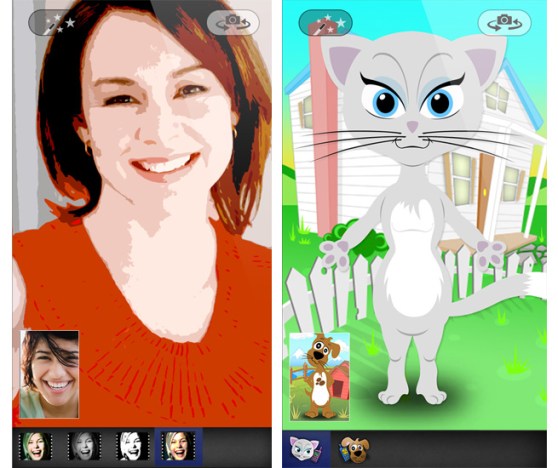 Popular video-chat application Tango has spiced up its iOS and Android apps with fun (and gimmicky) new features including video filters, avatars, read receipts, and more.

Using an insane 2-week development cycle, Tango has been able to constantly outpace Skype (its biggest competitor) when it comes to app updates, Android and iOS hardware support, and new feature development. It has attracted more than 75 million users across various platforms using this strategy. Now it adds even more features that could keep users coming back for more and monetize them.

“We’re always improving the quality of our apps and calls,” Tango CTO Eric Setton told us. “We want you to use it with all of your family and friends.”

The first big update is filters — an addition that will immediately make you think of photo-sharing phenom Instagram. The difference here is that the filters are for live calls. If you’re having an awful hair day or want to spice up your day, pick one of the four filters while on your call. The filters are “Vintage, Holga, Mafia, or Comic.”

“If people are shy or concerned about their appearance, [filters] can help put them at ease,” Setton said.

Next up is avatars that let you talk as a cartoon cat or dog. These avatars mimic your speech so when your mouth opens, the animal’s mouth opens too. Setton says one of the best reasons to use avatars would be if you are trying to get your children to video-chat with grandparents or other relatives. With the avatars in place, hopefully this engages them more. You could also use the avatars in place of your face when you have yet another awful hair day. (Jeez, buy some gel or something.)

Finally, the Tango app on iOS and Android will offer read receipts and a new Checkers game to play with others via Tango. Read receipts aim to let you know when your texts, pictures, and video messages have been viewed by the party you sent. Checkers adds to the list of games like TicTacToe and ToonTag that “millions” of users are playing inside Tango.

The four filters and two animal avatars are free with today’s app update, but it’s easy to guess that Tango will charge for additional options in the future. That way you could talk to your friends in a old-timey sepia filter or call your mom with a creepy rat avatar.

While Setton would not explicitly confirm that Tango would sell extra filters and avatars in the future, he implied it would eventually happen.

Palo Alto, Calif.-based Tango was founded in 2009 and has raised a total of $87 million from investors including Draper Fisher Jurvetson, Qualcomm Ventures, Access Venture Partners, Bill Tai, Len Blavatnik, and Alex Zubillaga. The company has 110 employees.