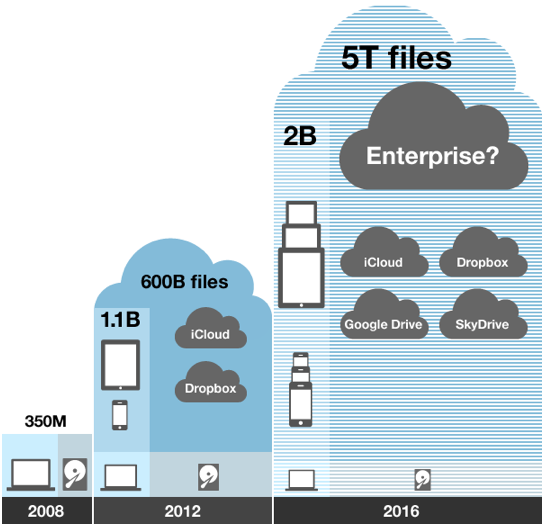 This sponsored post is produced by Leo Leung, VP of Marketing at Oxygen Cloud. This is part one of a four part series on the future of computing.

The desktop you’ve worked with for the last decade is on its last pixels.

Have you tried Windows 8 yet? Have you tried finding Windows Explorer? How about Apple Keynote? What’s the first option you see when you want to save your presentation? (Answer: not your computer)

Gartner predicts that 821 million smart devices will be sold worldwide in 2012, and at least one third of the US adult population will have a tablet by 2016. In her latest Internet trends report, Mary Meeker shows how the Wintel empire will only represent 1/3 of personal computing devices by the end of the year. Forrester Research says that 74% of workers already use at least two computing devices, and they want access to their content across all of them. The massive adoption of smart devices, the BYOD movement and the use of multiple devices are rapidly driving the desktop of today into extinction.

Lost in the conversation is an even bigger change – where the data is going. Over the last five years, Apple proved that customers would directly buy apps by the billions (35 billion to be precise). This forced Microsoft to respond with their app-centric strategy in Windows 8 and SkyDrive. Google is pushing a parallel ecosystem with Google Apps and Google Drive. In an app-centric world, each app controls its own files. If you like an app and its abilities, it is easier to store and find your work. It is easier to move that work around a particular ecosystem. It’s pretty cool for individuals. But app-by-app, device-by-device, businesses are witnessing a mass migration of data out of their hands and into the cloud.

Enter the consumer personal cloud. Your desktop takes a back seat to a massive hosted file server called iCloud or SkyDrive or Google Drive that together could store as many as 5 trillion files by 2016. You get easier storage and access for applications that are compatible with these big file servers. But this kind of thing has happened before. When the environment and use cases change, existing technologies don’t work anymore – and vendors rush out with their proprietary solutions. With Apple, Microsoft or Google’s personal cloud, when you pick a device, you’re locked into the operating system, the application, AND the storage for everything you create. Individuals might tolerate this, but not businesses. Businesses don’t want to purchase every device from the same vendor. Businesses can’t simply use a single vendor’s apps. And businesses usually create data that is intellectual property or work with customer data that is subject to corporate or legal regulation. A single vendor ecosystem doesn’t work.

With the right tools, IT can guide the future of business computing.

The rise of apps also led to all the discussions this year around the consumerization of IT. Just about every popular tech blog and all the consumer cloud and SaaS vendors have proclaimed, “IT is dead.” We think just the opposite. IT is needed more than ever. Not simply as a key decision-maker, as Ben Horowitz pointed out, but as a pilot in cloudy skies. Just like when computing transitioned from mainframe terminals to PCs, businesses need smart, strategic navigation of a seismic technology shift. With the future of workplace productivity at stake, businesses need more than an IT organization that cuts costs. They need IT to lead the charge.

So IT professionals – before you go out and order a shipment of iPads, Surfaces or Nexuses, remember that you are defining the desktop of the future. You will need to build something that is compatible with your business, your users and your IT goals, like the PC was at one point. The new desktop must work with any application and any device, whether it is running Windows 9, iOS 7, or Key Lime Pie. Any storage too, be it on-premises, hosted or both. We at Oxygen Cloud believe this is a data management problem, not an issue with collaboration or devices. And to solve a data management problem, we arm you with a fundamental infrastructure approach, not just a collection of application Band-Aids.

The death of the desktop ushers in a new era – and IT is best positioned to lay the foundation of business computing for the next 30 years.

Leo left EMC after seven years and joined Oxygen Cloud to change the world as the head of products and marketing. At EMC, Leo built one of the first enterprise cloud storage services and had senior roles working on service provider platforms, media technologies, high performance NAS, peer-to-peer storage, grid computing, and iSCSI.  With a background as a strategist and product manager, Leo blogs frequently about technology and the fundamental disruption that the cloud is creating. Leo is the DJ in our office every Friday afternoon, and known lovingly by the team as “The Man.” Follow Leo on Twitter @lleung