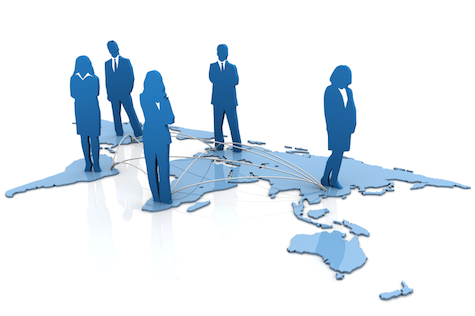 This post is brought to you UPS. As always, VentureBeat is adamant about maintaining editorial objectivity.

A company may have only 5 employees or be based out of a garage, but it can still have a global audience and customer-base. Accessing supply chains and setting up shop in other countries has become so easy that small businesses no longer need to start local — they can go big right off the bat.

This runs counter to traditional business strategies. In the past, it was an accepted truth that companies were better off incubating in a domestic market. That way they could develop a loyal following, prove value, streamline processes an amass assets before testing the rough waters of international competition — especially without a crack legal squad ready to take on foreign regulations.

So what’s actually changed? Global distribution networks are better established to be true, and it’s easier than ever before to tailor marketing messages and customer service to customers via online channels, social media and the like. At the same time, the number of multi-national corporations has multiplied (especially in tech think Facebook, Google, even Angry Birds maker Rovio), breeding a new generation of managers and future executives skilled in conducting international business.

In essence, companies with unique offerings and nimble response times now have the tools and ability to beat out larger firms with proven track records.

We’ll profile three of these companies and examine why and how they decided to establish a global presence from the beginning. It’s clear that digital startups have an advantage in this arena, with products that can be delivered quickly and seamlessly and customers that are easy to communicate with online. But retail companies offering physical products aren’t being left behind either, delivering their goods around the world.

1. Pinterest
To get the easy ones out of the way, let’s talk about content sharing startup Pinterest. Why Pinterest? Well, aside from it growing its worldwide reach by more than 4,000% between 2011 and 2012, it’s representative of a whole host of startups that capitalize on social tools, virality and advances in mobility to go global fast. You might also find mobile photo app Instagram and even blogging platform Tumblr in this category.

Very similarly, Tumblr, an older sibling founded in February 2007, also had a global presence immediately and has more than doubled in size in just the last year — boasting more than 50 million blogs around the world.

It’s clear that virality had a lot to do with the success of all three of these companies. Their brand names carried a lot of weight almost immediately after they were founded. But from a supply-chain and business conduct perspective, availability on mobile platforms — tablet, phone etc. — probably made the biggest difference.

Today, the Apple’s App Store exists in 155 countries (it added 32 new ones earlier this year, and its equivalent for Android has similar global reach. This has made it easy for startups based on applications to expand quickly across borders. While licensing issues to impact some of these companies, most of the hurdles are cleared by Apple automatically, including payment, terms of service, etc.

Because the App Store requires users to pay with prepaid cards or by charging the credit cards they have registered with iTunes already, app developers don’t have to worry about the legal red tape or piracy concerns that come with collecting money for goods and services overseas — it’s all taken care of already. This doesn’t affect free services like Pinterest and Tumblr, necessarily, but having them internationally available on the App Store and Android Market — which logged a combined 20 billion downloads last year — made a huge difference.

Pinterest, Instagram and Tumblr also benefit very clearly from having computer and internet-savvy users that prefer to be reached and communicated with via online channels. This makes it easy to keep a multi-million person user base happy with minimal customer service infrastructure.

2. Kaltura
This fall, open-source video platform Kaltura announced a funding round of $25 million, earmarked for global expansion. Founded in 2006 to help people collaborate on video projects, its 300,000-organization roster now includes huge names like HBO, Zappos, Harvard and Wikipedia. It’s now valued at billions of dollars — and much of this success can be attributed to its founders never thinking small.

The startup launched with the goal to deliver video to any user no matter what kind of device they are using or where they are based. So the concept was global to begin with. Offering an open-source software package, Kaltura also benefited tremendously from making itself available for international web platforms like WordPress and Drupal (much like App Store apps). But the real keys for Kaltura are its global development community and commitment to global staff.

Today, the startup has over 40,000 developers who contribute code, new features and fix bugs in the software. These individuals are located all over the map. This has not only been a huge proof-point for the company in raising funds and gaining interest, it also gives it an international feel that couldn’t simply be replicated by a web or social media presence in other countries. The fact that people who live everywhere have a stake in the software’s performance and future is a huge a deal.

On top of that, the company has placed a lot of emphasis on building an international talent pool. While it’s headquarted in New York, it also has offices in Israel, Europe and now Asia. It’s also made a point of recruiting out-of-the-box thinkers from all walks of life, even if that means deviating from the usual pedigree of top-flight software engineers. Kaltura plans to use these toeholds around the world to launch new products and expand its mission.

A similar example is Fiverr, a sort of eBay-Task Rabbit hybrid where people offer services for bartered prices — like going grocery shopping, doing your laundry, writing a song, etc. As a social space online, it connects buyers and sellers from over 200 countries, allowing them to find and form their own business relationships. This means that Fiverr doesn’t have to worry about deal terms or language barriers, allowing it to expand into countries quickly and easily.

3. Gilt Groupe
It might seem like the companies mentioned above are cheating when you consider how simple digital supply chains and regulations can be. Things are completely different when you have to actually deliver a physical product to someone. But even retail has become easier to internationalize in recent years, and there’s no better example than luxury merchandise seller Gilt Groupe.

In order to comfortably afford a global strategy — including all the extra charges associated with shipping internationally — Gilt Groupe got creative with its supply chain. The company agrees to purchase leftover vendor inventory at extremely steep discounts. Then it adds its own margin on top of the discounted price in order to sell luxury products like clothing and accessories to his members at relatively low prices. By holding flash sales and cultivating brand loyalty and excitement via online marketing, it has built a very enthusiastic following.

Last year, four-year-old Gilt extended its flash sales to more than 100 countries. It did this essentially in response to incredible demand for overseas shipping. To make this possible, Gilt partnered with a company called FiftyOne to syndicate its website across international borders. Now when you go to Gilt, the checkout process, currency and other account information is all tailored to location. That way Gilt can customize the taxes, duties and shipping costs depending on user location, which covers a bulk of the costs the company could incur.

A major part of Gilt’s success is that it knows where it’s business will do well. As a luxury brands company with prestige, it prioritized expanding into Asia — particularly Hong Kong despite the high costs of delivery. The Asia-Pacific region has been identified as a hotbed for startup sales with a regional GDP of $16 trillion and millions of new people coming online every year.