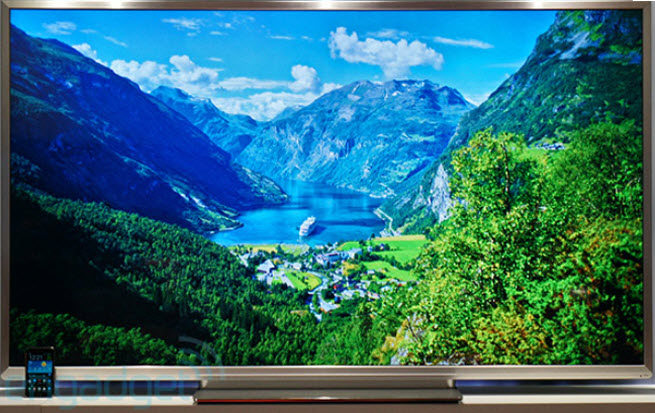 Consumers aren’t going to be that crazy about prices for next-generation TVs. But the tech industry is salivating at the possibilities of upselling people from high-definition TVs to 4K TVs, which have four times as much data on a screen. These so-called Ultra HD TVs could be a boon to the industry if they fall in price and take off.

Broadcom hopes for such a future, and that’s why the chip maker is unveiling its first Ultra HD TV home gateway chip at the Consumer Electronics Show in Las Vegas today. The Irvine, Calif.-based company says chips like this one are a necessary first step in building an ecosystem to make the next-generation TVs thrive.

A home gateway is a box you can buy at an electronics store and hook up to your home network. It is a portal into a web-connected home and the point in your own personal network where you can store all of your digital content. If you click on a movie, a service provider will send the digital bits to your gateway. From there, the gateway transcodes the video (converts it to the right format), and then sends it on to the appropriate screen in your home where you want to view it. The gateway also handles in-home wired or wireless networking.

The new Broadcom gateway will be able to take a 4K video stream coming in from your cable TV provider and transfer it to the right TV screen in your home without choking on the huge amount of data. (A 4K video uses four times the data an HDTV video stream uses). Consumers are likely going to want their video on multiple screens around the home, and the home gateway is the most efficient way to get it to those screens without using a ton of network bandwidth, which is a scarce commodity.

The chip inside the home gateway will pack a lot of punch. Built with a 28-nanometer manufacturing process, the quad-core ARMv7-based BCM7445 Ultra HD video decoder can handle tasks such as transcoding, which takes a lot of computing power. It can process 4K video streams, and it uses an efficient compression technology based on the new High Efficiency Video Coding standard. That HEVC standard (which will be known as MPEG-5 or H.265) will be required to broadcast Ultra HD video. It will enable better speeds for Internet video downloads, enabling consumers to download movies in half the time, with higher quality video, at half the bit rate previously required.

“The clarity and brilliance of UltraHD television is a significant step forward in viewing enjoyment and is the next true evolution in TV innovation,” said Dan Marotta, executive vice president and general manager of the Broadband Communications Group, in a statement. “Broadcom is enabling a dramatic improvement in the TV viewing experience while making UltraHD video delivery economics work for service providers.”

“HEVC will be required to broadcast UltraHD content, notably major sporting events and Hollywood content,” said Michael Inouye, senior analyst of TV and video at ABI Research.  “Next-generation user experience, including 80-inch and larger displays, will be improved by the adoption of UltraHD and HEVC. The efficiency of HEVC will also enable additional services, including faster IP downloads and the provisioning of VoD services over wireless networks.”

The chip is available in samples now and will be in full production in mid 2014.