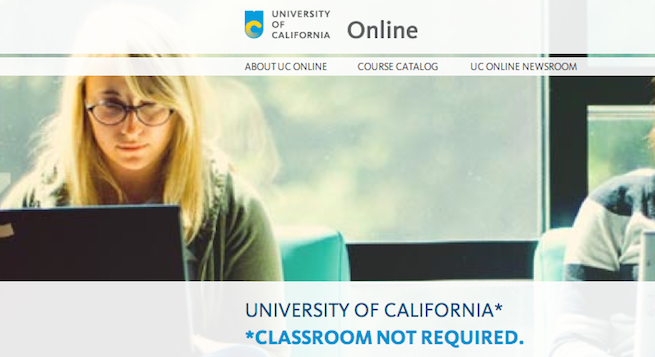 In an effort to show off its array of online courses, the University of California has poured millions of dollars into promoting its UC Online system. But as the San Francisco Chronicle reports, only one person from outside the UC system has taken a class.

For its operating costs, UC Online took out a $6.9 million loan from UC. Since the earliest meetings in 2010, it has spent about $5 million, with most going to a marketing company.

Back in 2010, prestigious universities like Harvard and Stanford began to offer their most popular courses online free of charge. In subsequent years, the movement known as the Massive Online Open Courses (MOOC) has caught on. In recent months, universities began to accept them as a form of college credit.

On sites like Coursera, over 700,000 users worldwide can pick and choose from hundreds of courses in the humanities and sciences from dozens of elite universities.

With all the competition in this space, it hasn’t been an easy run for UC Online, given that many of its classes cost over $1,000. The university was only able to attract one high school girl, who paid $1,400 for an online precalculus course at UC Irvine and four units of UC credit.

In a recent interview with VentureBeat, Coursera founder Andrew Ng said their approach worked because they took the time to “build up communities around the courses.” He explained, “Too often, universities had been putting up videos on the web and hoping for the best.”

UC has achieved better results with its student population. Seventeen hundreed UC students are taking 14 classes that launched last year. Keith Williams, the interim director for UC Online, told the San Francisco Chronicle that these courses were developed by the faculty and had undergone rigorous peer review.

Funding for public schools is in short supply. To ensure that the project doesn’t circle the drain, Gov. Jerry Brown — a Democrat who’s had to aggressively cut California’s budget due to multibillion dollar shortfalls — got involved with the UC Online project. He invited popular MOOC provider Udacity to show UC how it’s done.

During a visit in November, Brown made a comparison to the U.S. Postal Service, “a venerable institution being upended by digital change.”