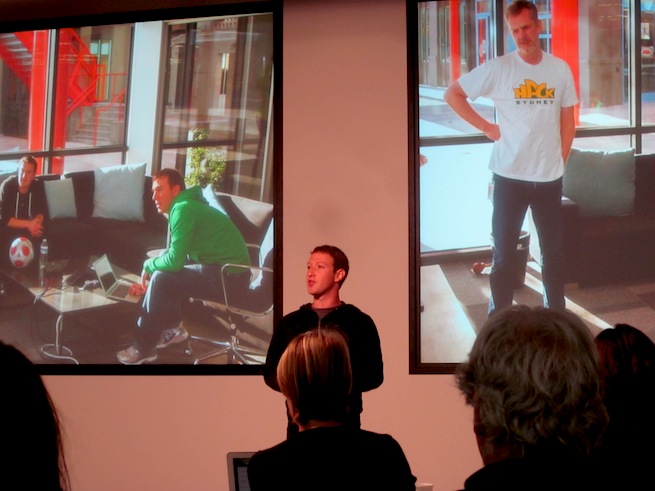 The social network invited press to the mystery media event on January 8, when the stock was sitting around $29 a share. The announcement caused the stock to pop up to over $30 a share, the first time it’s broken out of the $20s since July. Investors, interested in a new way to make money off of Facebook, pumped the shares further up to a high of $32, but the lack of information about a monetization strategy or advertising in search caused the stock to remain in the red. It closed today at $30.10 a share, down 2.74 percent.

At the end of the event, Facebook’s stock had fluctuated between a one and two percent drop, hovering for the majority of the launch event.

Facebook’s Graph Search allows anyone to search using natural language on Facebook. It intends to answer your questions, as opposed to providing you links to the answers like a traditional search engine. For example, you can ask “Who lives in New York and likes baseball?” and it will provide you with a list of people who fit those credentials.

The company also deepened its partnership with Microsoft’s Bing search engine, bringing Bing web search results in-line with Facebook’s search results (just in case you didn’t find what you were looking for). But Mark Zuckerberg, the social network’s founder and chief executive, impressed upon us that the relationship is not exclusive.

“We would love to work with Google. When we did our Bing web search integration, we were very public about the fact that this wasn’t a thing that we were trying to do with Bing. We’re trying to make search social in general,” he said. “We’d want to work with any web search company — as long as the companies are willing to honor the privacy of the folks who are sharing the content on Facebook. And we haven’t quite worked that out yet.”

Unfortunately, Zuckerberg stressed that this product is in its early stage and didn’t give much information regarding monetization. When asked about how the search will start making money for Facebook, Zuckerberg skirted the topic, saying that the engineers are currently focused on building out the best product they can.

Zuckerberg promised that this is just the first beta, “B-1” of the Graph Search, and that we can expect to see mobile support soon, as well as new languages (it’s only available in English for now) and more indexed content.

As far as whether Instagram data will eventually make its way into this feature, Zuckerberg said, “That should be on the list of things that we’ll hopefully one day get to.”