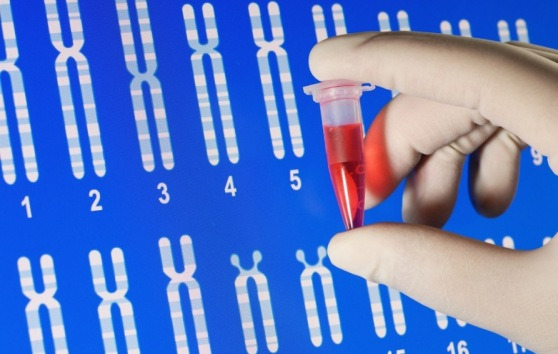 ‘Big data’ is one of the most over-used buzzwords in the startup vernacular, and founders rarely have the goods to back it up. So you’ll understand that I was intrigued — but highly skeptical — when an email with the subject line “using data to cure cancer” popped into my inbox.

But Ayasdi, a startup that closed $10 million in venture funding today, doesn’t just talk the talk. Stanford researchers have been baking the complex algorithms behind Ayasdi (its quirky name means “to seek,” in Cherokee) for over a decade, with the goal of unlocking the hidden value in human genetic data.

In 2008, the founders, Gurjeet Singh, Dr. Gunnar Carlsson, and Harlan Sexton, decided to commercialize the technology. With the government stepping up its funding for science, they were able to pull in $3.5 million in grants from DARPA, the department of defense agency responsible for building new technology for the military, and the National Science Foundation. The result? A synthesis of machine learning technology and topological data analysis (TDA) that has impressed a score of Silicon Valley investors. Rather than typing in search-style queries, the tools allow for automated discovery of information.

As Dr. Carlsson explained in an interview, “The idea is to answer questions that you didn’t know to ask.” 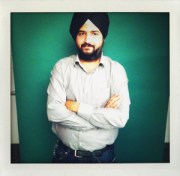 This year, the 30-person team of engineers will expand its marketing and sales efforts with funding from Khosla Ventures, Floodgate, Data Collective’s Matt Ocko, serial entrepreneur, Steve Blank, and more. Storied investor Vinod Khosla, who rocked the medical world with the statement that 80 percent of doctors would be replaced by machines, said Ayasdi’s “machine powered intelligence” has the potential to unearth “previously unattainable insights that will help solve some of our most pressing global, social, and economic issues.”

Eric Schadt, Director of the Institute for Genomics and Multiscale Biology, has a team of researchers using the technology to identify the genetic predispositions of many diseases, including cancer, which they hope will help them “glean new insights that will lead to breakthrough drug therapies.”

Ayasdi is working with the nation’s top hospitals and medical researchers to uncover more targeted treatments for disease. Singh, the company’s CEO, told me that hospitals and big pharmas are routinely pulling data from public sources — medical researchers are required to publish their data  — and combine it with private data to yield new insights. 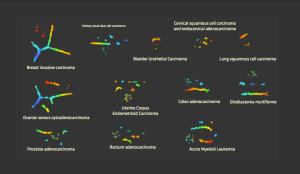 Above: A data visualization depicting 14 variants of breast cancer

The data isn’t anything new — it’s the technology that has evolved. “We have automated the discovery of knowledge from data,” said Singh in a phone interview. “We were able to discover a new type of breast cancer without asking questions.”

Singh was referring to a recent breakthrough where Ayasdi mapped 14 variants of breast cancer. Using data collected during a 15 year period, and studied by thousands of scientists, the algorithms discovered a sub-group of patients that have a higher chance of survival based on their genetic profile. If a patient falls into this sub-group, it is unlikely that they will require chemotherapy.

Ocko witnessed this medical breakthrough first-hand in the minutes before he opened his check book. “The massive deficit that corporations and governments face as the amount of data gets exponentially larger is not more intelligence, it’s insights and intuition,” he explained by phone. The data-focused investor said the company’s ability to provide human analysts with “intuition from vast amounts of data in very short periods of time” is virtually unprecedented.

In another recent partnership, with Mount Sinai Medical Center, Ayasdi was used to point to targeted treatment options for E. coli sufferers. E. coli affects more than 265,000 people in the U.S. every year, and millions around the world. It is known in the medical community for developing resistance to many drugs, and doctors are never 100 percent sure if a treatment will work or not. Mount Sinai is using Ayasdi to analyze the entire E. coli genome sequence, which includes more than 1 million DNA variants. This will further our understanding of why some types of E. coli develop resistance to antibiotics and how we can combat the spread of the bacteria.

Singh, a former researcher at Stanford, told me that the company has secured 20 customers in the oil and gas, government, pharmaceutical, and healthcare sectors. Big name customers include Merck, the Food and Drug Administration, and the U.S. Department of Agriculture.