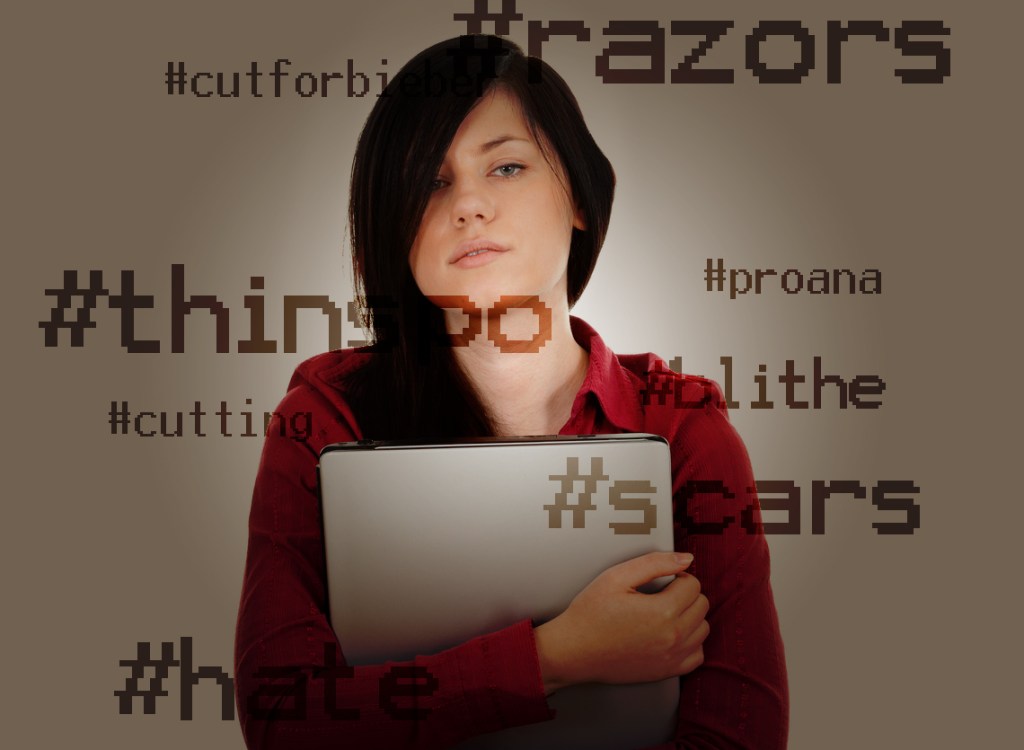 The social web has a big problem with self-harm.

Cutting, anorexia, bulimia — all of these behaviors are vilified, glorified, and graphically depicted on services as mainstream as Pinterest, Instagram, and Tumblr and on more private communities like LiveJournal.

As outsiders to these issues receive a window with a view, they have reacted in a variety of ways. Some mock. Others call for programmatic censure. A few try to find ways to help.

But the problem and its solution are too intertwined to make helping very simple. As a HelloGiggles blogger wrote recently:

Part of me feels like Instagram should delete each and every one of these photos. Disable all related hashtags. Show zero tolerance for such content. I know that even if Instagram washes itself clean of these posts, the problem does not go away. But as much as I personally love social media, I think it’s exacerbating the problem. It’s making these girls feel like they’re not alone, but in a backward way. For as many people that get help and solace from others suffering from similar issues, there are just as many who get encouraged to continue their highly dangerous and destructive behavior.

It’s a dangerous, sad, baby/bathwater scenario, one that young filmmaker Monica Zinn has been exploring and researching for some time. Zinn, a 19-year-old college sophomore, is of the perfect age to relate to her subjects’ struggles with youth culture and with the new world of online media. Her 2011 short film Perfection won awards for its depiction of eating disorders, mostly in teenage girls. Her new project, Self-Inflicted, is currently in the crowdfunding stage and aims to correct some common misperceptions and create empathy for those who engage in self-harming behaviors.

And, as Zinn knows well, the Internet is and will continue to be a huge part of that overarching goal, as much as it is part of the overarching problem.

Here’s our interview with Zinn about her upcoming film, her research, and how the social web is shaping and being shaped by self-harm.

VentureBeat: A big part of media these days is the web and social sites. There are at least two aspects to self-harm and the Internet: The first is the proliferation of techniques or methods of self-harm and encouragement to indulge in such behaviors, and the second is a nonjudgmental support system for people caught in cycles of self-harm.

Monica Zinn: I also think there is another one, and it is the judgmental talk from people who are uneducated about self-harm. #cuttingforbieber was started as a joke by someone on 4chan. It’s so obvious that we don’t know nearly enough about this practice and its effects if people are willing to start a trending topic like that.

VentureBeat: It seems that by trying to get rid of all evidence of self-harm on the Internet, one might also be throwing out valuable emotional resources for people in need.

Zinn: We shouldn’t be trying to get rid of all of the evidence online; from what I’ve heard and seen, the Internet can be a beautiful place if you are looking for help. We can’t force people to find help, though, but erasing the evidence of self-harm on the Internet won’t do anything.

When I first saw a thinspiration blog, all I wanted to do was get it shut down. Then I saw how much my friends were getting from it.

People were self-harming way before the Internet — and a lot of these kids don’t have anyone else to talk to besides people on the Internet, and there are a lot of people there to help them. For example, I run a blog now for the film where I post anonymous stories, and people have found it very therapeutic. Gives them a chance to connect!

You just have to know how to use the Internet. And I think we really need to be teaching our kids not only how dangerous the Internet can be but also how great and wonderful it can be!

Growing up, I was taught by adults how awful and scary the Internet was, and that I shouldn’t be on it, logging onto chat rooms. But I did anyway, and I taught myself how to use the Internet for good. Not all children will do this, though. We need to stop being afraid of our children using the Internet; they’re growing up with it like oxygen, and can do a lot of good by being that connected with one another.

We can teach our kids how to safely use the Internet without only exposing them to all of its horrors. The Internet is like the real world: You can’t go walking down an alley at night and feel completely safe. You also can’t go to certain websites or talk to certain people.

VentureBeat: What motivates you as a filmmaker? Why have you chosen these difficult topics?

Zinn: As a filmmaker, I am motivated and driven by the stories around me. These difficult subjects chose me, really.

I had an experience when I was 16 that was not only traumatic to me and my family but made me feel like people no longer saw me just for me anymore. They saw someone they felt bad for, someone they couldn’t connect with. My mom would always tell me, “They’re young. They don’t understand.” But I have seen that the simple fact of knowing there is misunderstanding doesn’t make the hurt any easier.

Being mislabeled is incredibly harmful, but I noticed that I am a mislabeler as well. We all are. And that’s OK as long as you are aware of it and work against it. We all put people into categories so that we have a basis on how to interact with them. … We do it with everything: age, race, gender, education, accent, and nonverbals. We judge people before we know them naturally because otherwise, we have to put in effort with every single person we meet.

People who don’t fit the “norm” are going to be mislabeled. Heck, if you’re labeled as the “norm,” you’re being mislabeled. But it’s not as harmful as the other.

I make films to show people the truth they’re missing, the truth they passively ignored. The truth they thought they knew. I’m still very young, though, and I really make movies to understand the things I don’t already. I see myself mislabeling something and I think, “Huh — Why am I doing that? What can I do to stop that?”

VentureBeat: What makes themes on self-harm so unique to young women in particular?

Zinn: Well, self-injury is evident in all genders, ages, races, and so on. I think what we have been seeing is more women are willing to talk about it. Women can be drawn to the practice because we internalize our emotions, generally speaking. We were “allowed” to cry, but we have also been stereotyped as more emotional because we have been brought up to be OK crying or showing emotion.

Men, on the other hand, have not grown up with this, so men who turn to self harm generally won’t speak about it as much for the same reason they won’t cry in front of someone. It’s not commonplace — yet.

Removing a hashtag does nothing. If anything, those hashtags show us what we’re doing wrong.

Also, young women grow up with a lot of pressure to look/act a certain way different than men. In fact, men don’t have that much pressure, appearance-wise, growing up. … So, as young women, we take it upon ourselves and instead of blaming society and the media for creating and promoting nearly impossible standards for us to live up to, we blame ourselves. “I’m not good enough, I’m not pretty enough. I’m worthless.”

Anyway, because generally women internalize, those emotions build up. And you release them through self harm.

VentureBeat: When “normal” people see portrayals of eating disorders or self-injury, what are the range of responses you’ve seen?

Zinn: Most people are pretty shocked when they see self-injury or eating disorders portrayed in the media or in real life. … People do one of two things: disconnect or connect.

Usually when people connect it’s because they’ve had personal experience with it either with themselves or a loved one. Everyone else pretty much disconnects, and those are the people I am trying to reach. Films have a chance to connect everyone on a universal level — so do books! Not that many people read anymore, though. Narrative films can be interpreted a bunch of different ways and automatically disconnect you from any real connection to the characters/actors because they are not real. Documentaries don’t give you this option.

VentureBeat: How do you think self-harm is portrayed correctly or incorrectly by the media and the culture?

Self-injury normally isn’t portrayed correctly in media or culture. I remember in middle school people would say, “Not like I’m going to go cut my wrists about it.” Or, “Why don’t you go cut about it,” as if it were no big deal.

For the most part, the portrayals of self-injury I’ve seen in the media are pretty sensationalist and are built for the purpose of getting a reaction. … I remember the media freaking out over [singer] Demi Lovato’s eating disorder and self-harm issues, and the only reason people found out about them was because someone noticed scars in a public photo of her and she was forced to explain herself.

Zinn: Self-harm is really a new thing as far as people knowing about it. The awareness and education are growing. So there isn’t much information about people who self-harmed before the digital age. I know that it used to be classified as something only young women with eating disorders did.

Like anything, though, the digital age with self-harm allows self-harmers to connect with each other, for good or for bad. But honestly, it’s better for them to connect than not. You can’t force someone to not hang out with the “wrong crowd”; they are with them because they feel connected on a level that they’ve never felt with anyone else. And if you let them figure it out, they will find out what they really want for themselves. But yanking away the only community they’ve found is just wrong.

When I first saw a thinspiration blog, all I wanted to do was get it shut down. Then I saw how much my friends were getting from it. This wasn’t my battle; it was theirs. They have to show themselves they have the power not to look at blogs like that. If it’s forced, there will be no results.

VentureBeat: How do you think blocking specific hashtags or search terms does or doesn’t help the situation?

Zinn: Removing a hashtag does nothing. Do you know what it does? Makes it harder for people who don’t self harm to not see self harm, and that’s not what I’m about at all.

If anything, those hashtags show us what we’re doing wrong. We need to be embracing our youth and educating them and understanding them.

We also can’t act like we do understand them! With every generation there are new problems and new solutions, we can’t keep acting like because we were 13 once, we know what it’s like to be 13 in today’s world. We need them to tell us what they need, and be willing to give it to them. And again, taking that hashtag away defeats the purpose. Everyone knows that you stick to something when you choose to do it yourself.