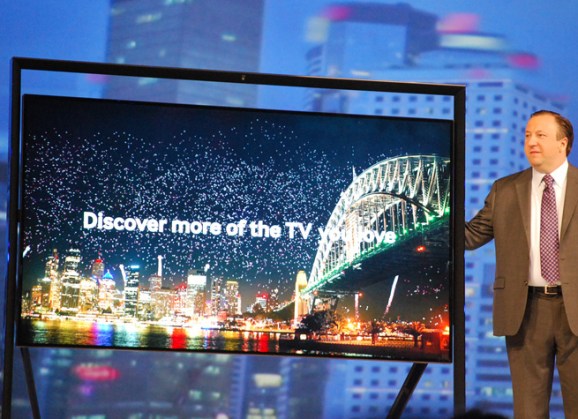 While 4K Ultra HD televisions were everywhere at this year’s CES, 4K Ultra HD content was not.

“4K” is a buzzword for video content with four times the resolution of current 1080p high-definition displays. It’s beautiful, hopelessly expensive, and so far supported by just about zero content.

The Japanese government, however, is looking to fill that void. The Asahi Shimbun reports that Japan’s Ministry of Internal Affairs and Communications could launch the world’s first 4K broadcast as soon in 2014 — two years ahead of initial launch estimates.

That’s big news for Japanese companies like Toshiba, Sharp, and Sony, all of which have been heavily pushing the new video format. Getting 4K content out there is key if these companies want to give consumers reasons to actually buy 4K displays.

The first broadcast would come via communications satellite, and would be followed quickly by satellite broadcasting and plain old wired digital, the Asahi Shimbun reports.

No amount of 4K content, however, can solve the problem that currently plagues the format: It’s too damn expensive. 4K Ultra HD televisions run for roughly ten thousand dollars — and that’s on the low end. And you’d need to buy a television as large as 80-inches just to see the 4K difference. Hello, impracticality.