Samsung Electronics said today it is creating a $1 billion investment fund, dubbed the Samsung Ventures America Fund, and a separate $100 million Samsung Catalyst Fund to invest in global innovation. It is also setting up a series of international research and development centers in various technology hot spots.

That’s a huge investment, but one that isn’t hard for the Korean business giant, which last year had $188 billion in revenues. 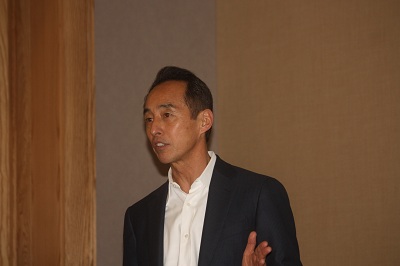 Samsung made the announcement at an event in Menlo Park, Calif., where the newest Samsung Strategy and Innovation Center will be based. It will be headed by Young Sohn (pictured right), president and chief strategy officer of device solutions at Samsung Electronics.

“We see tremendous opportunities and transformations over the next five years driven by Big Data centered around mobility, cloud and the internet of things,” Sohn said. “And Samsung will be a significant part of this revolution. This exciting opportunity for us to engage with entrepreneurs and innovators and empower them to leverage Samsung’s technology and global brand presence to bring our collective visions to the market.”

The investments will kick off a new era of strategic alliances, acquisitions, R&D and investing, Sohn said at the press event today.

“This is a very disruptive time, and I’ve been in Silicon Valley for 30 years,” Sohn said. “The PC drove a lot of the growth. But it is now a post-PC era,” requiring different kinds of low-power mobile devices.

“In disruptive times, anything can happen, and we want to make sure we are on top of that,” he said.

At the same time, Sohn said that venture capitalists have been shying away from investments in basic science and technologies that take a long time to incubate. VCs are more focused on applications or late-stage companies, he said.

“We are stepping up and putting more in the fund,” Sohn said.

While the Samsung Catalyst Fund is brand new, Samsung already has $1 billion in assets under management through its Samsung Ventures investments. That arm invested $160 million in 20 companies in 2012. Samsung will now step up that investment, Sohn said, with a lot of the money going into components and subsystems, but not in content or services. Through its history, Samsung Ventures has seen 47 initial public offerings for its portfolio companies and 16 acquisitions.

Samsung will explore new opportunities related to its Samsung components businesses, with a focus on cloud infrastructure, mobile privacy, internet of things, human interface, and mobile health. Entrepreneurs who are funded by Samsung will get access to resources including strategy and technology mentorship from Samsung’s SSIC fellows.

The $100 million Samsung Catalyst Fund will be focused on early-stage companies in the components and subsystems businesses. The SSIC will not be an incubator, per se, since it will invest in startups that are not housed in Samsung’s own facilities in Menlo Park.

“There is a hunger for supporting entrepreneurs, academics, engineers and artists,” Sohn said. “We want to make sure we help that process through this Catalyst Fund. Everybody has a different flavor. We are much more oriented for the long term.”

Samsung will hold a competition, SamsungCreate Challenge, later in 2013 to encourage artists, engineers, entrepreneurs and other innovators to use Samsung’s paltforms. The contest will give $10 million in seed investments for winners.

Sohn has worked in the tech industry for decades. He spent time in the memory chip division at Samsung, among other places. He previously served as CEO of Inphi and was formerly president of Agilent Technologies’ semiconductor group.

Sohn said that by 2020, smartphones will have long battery life, built-in 5G connectivity with fast internet bandwidth, awesome screens, and all sorts of applications that are supported in hardware.