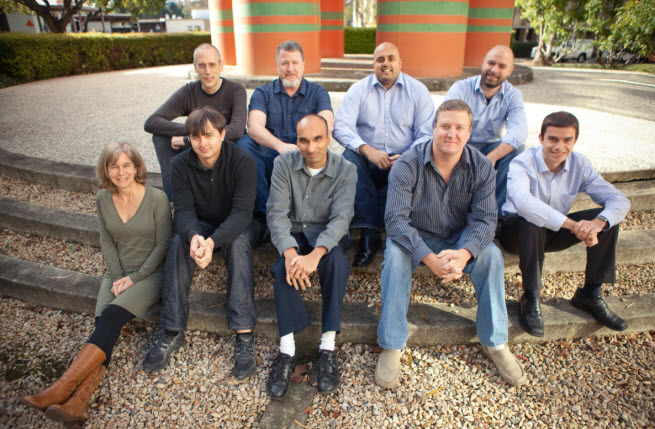 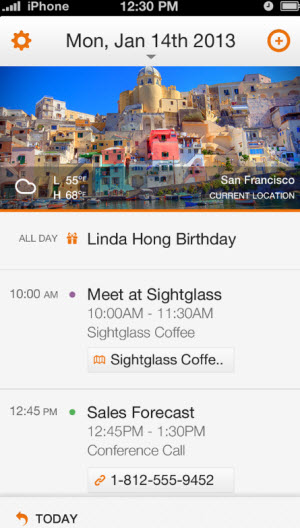 In the age of smartphone apps, the calendar certainly seems dumb. Tempo AI, a startup spun out of Silicon Valley’s SRI International research center, is changing that today with the launch of its Tempo Smart Calendar on the iPhone.

The app takes advantage of artificial intelligence to keep you on time and prepared when you’ve got back-to-back meetings. It converts the old-fashioned data calendar into a smart secretary. It can do things like prompt you to leave for your next appointment, guide you there with a map, and share the relevant documents for the meeting with you so that you don’t have to go searching for them while you’re on the run.

The Tempo Smart Calendar may sound a little like Siri, and it is a kind of cousin to Apple’s so-called personal assistant. The underlying artificial intelligence technology comes from Menlo Park, Calif.-based SRI, which with funding from the Defense Advanced Research Projects Agency created a five-year research project dubbed CALO (Cognitive Assistant that Learns and Organizes) to develop a smart personal assistant. Tempo AI licensed technology known as Prep Pack, which organized data for more efficient use.

Tempo AI, a startup funded by SRI, took the technology and used it to create a smart mobile productivity app that analyzes data from your mobile calendar, your email, you location, and your contacts. It applies machine learning to enhance meeting details or even suggest whom you should invite to a meeting, said Raj Singh, founder and chief executive of Tempo AI, in an interview with VentureBeat.

“I became a slave to my calendar, with conference calls on the road,” Singh said. “I had to look up destinations in Google maps and search my smartphone for documents that I should have read already.”

The app is the brainchild of Singh (pictured at top, top row, second from right), a mobile veteran who dreamed it up in 2011 because he had challenges while trying to stick to his own busy schedule. An entrepreneur-in-residence at SRI, Singh teamed up with Microsoft veteran Corey Hulen and Thierry Donneau-Golencer of SRI.

“I wanted to build something that would make my life easier and reduce stress,” Singh said. 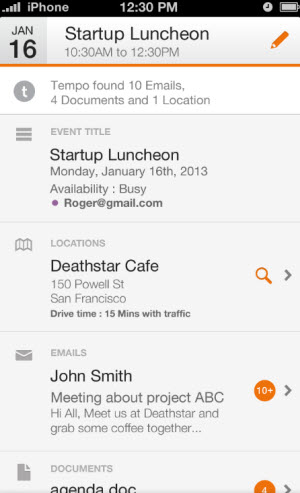 The personal assistant streamlines routine tasks, and it finds and neatly organizes everything you need to be fully prepared. It fetches contacts, email, and related documents and places them in context.

In a single tap, anyone can complete common tasks, saving time and reducing stress. If you’re running late for a meeting, you can tap Tempo Smart Calendar, which presents you with a variety of options. You can tap a single button to send a message to other meeting attendees, saying you’ll be late by 15 minutes or by a half hour.

Tempo Smart Calendar focuses on what is coming next, anticipating what you need to do. It provides you with the relevant emails for a meeting in the event summary. It also adds documents and locations. You don’t have to type in a long search while you’re driving or walking to a meeting. That makes you both efficient and safer while you’re trying to move at a high speed. If you need to find a phone number, Tempo Smart Calendar will do that for you, so that you can place a call to tell someone that your flight has been delayed or you’re stuck at the office.

Tempo Smart Calendar is designed to fill in the gaps and suggest locations, contacts, emails, and documents, even if only minimal details are added to meetings and events. With a single tap, the app can dial into conference calls, handling the passcodes. It can review emails that pertain to specific meetings and events. It can open related documents such as Word, Excel, PowerPoint, or PDF files. And it can find an exact location without an address.

And the app can fetch driving directions, locate nearby parking, and estimate drive time. With a single tap, you can reach attendees via phone, email or text. It can send a already filled-out “running late” email or text to a whole meeting roster. It can check your flight status, browse attendees’ LinkedIn profiles, scout locations with Foursquare and Yelp, and post birthday messages to Facebook. If you’re counting up how many thumb taps Tempo Smart Calendar gets rid of, it’s a lot.

Tempo Smart Calendar can also handle tasks that are more complicated. If someone’s anniversary is coming up, it can remind you and send you a link to buy flowers. 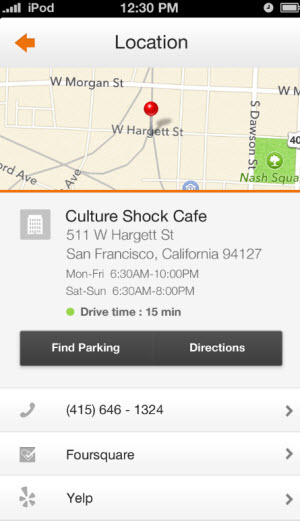 “The calendar is where life happens, and Tempo gives people more control over their day by enhancing their calendars in a meaningful way,” said Singh, founder and CEO of Tempo AI. “We’ve designed the experience to reduce the noise that’s often associated with virtual assistants that push information to users out of context or intent. Tempo surfaces information and actions in your calendar in the context of the people you know, the places you are going, and the information you’ll need.”

Singh believes that mobile calendars (ahem, Microsoft and Google) have stagnated as simple digital representations of paper calendars. They cause “friction and hassle” for users because there is no context for any of the information in their calendar, Singh said.

Over time, Tempo Smart AI learns your habits and preferences, and it becomes more useful in making suggestions. Tempo AI uses the same kind of technology as Siri, but for now it is not voice-activated. SRI has spun out lots of firms over the years, generating billions of dollars in value over time. Tempo AI is still based within the vast hallways of SRI’s headquarters.

At some point, Tempo AI might try to modernize other productivity apps. But for now, it is focused on doing whatever it can to make your day easier. Tempo AI taps technology that can either pull data out of repositories for you, or push information that you need at the moment.

“The calendar is identifiable, it has closed intent, and it is structured,” Singh said. “This is about connecting the dots.”

The free app itself can sync to your local calendar and the address book in your iPhone. As an option, you can connect it to Google’s Gmail. Later on, Tempo AI will offer premium versions that people will pay for.

Singh said that his app will differ from competitors in that it will be open, while others are closed apps tied to one vendor’s ecosystem.

“We don’t want your data to be stuck in a silo,” he said.

Tempo AI has seven employees and it has raised seed funding from SRI.