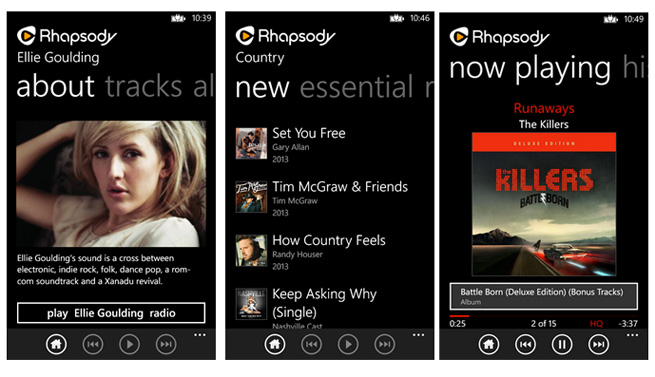 Music streaming service Rhapsody has launched a sleek new app for Windows Phone 8 — just a week after competitor Spotfiy launched its app on the same platform.

Rhapsody is the oldest player in streaming music in U.S. and it has more than a million paid users in the U.S. But it has lost mind share to Spotify, which is raising copious amounts of money to build buzz and acquire customers all over the world. Still, Rhapsody keeps collecting new users and will soon launch in Europe. High-quality mobile experiences will also help.

Version 3.0 of Rhapsody for Windows Phone is specifically built with Windows Phone 8 in mind and has a lot of improvements for people looking to rock out with the service’s more than 16 million tracks.

Heres’s what you’ll get in the new version of Rhapsody for Windows Phone 8:

Rhapsody doesn’t offer a free version of its product like Spotify, so it focuses its efforts on the experience of its paid subscribers. It costs either $10 or $15 per month depending on your needs, but most folks will be fine with the $10 plan.