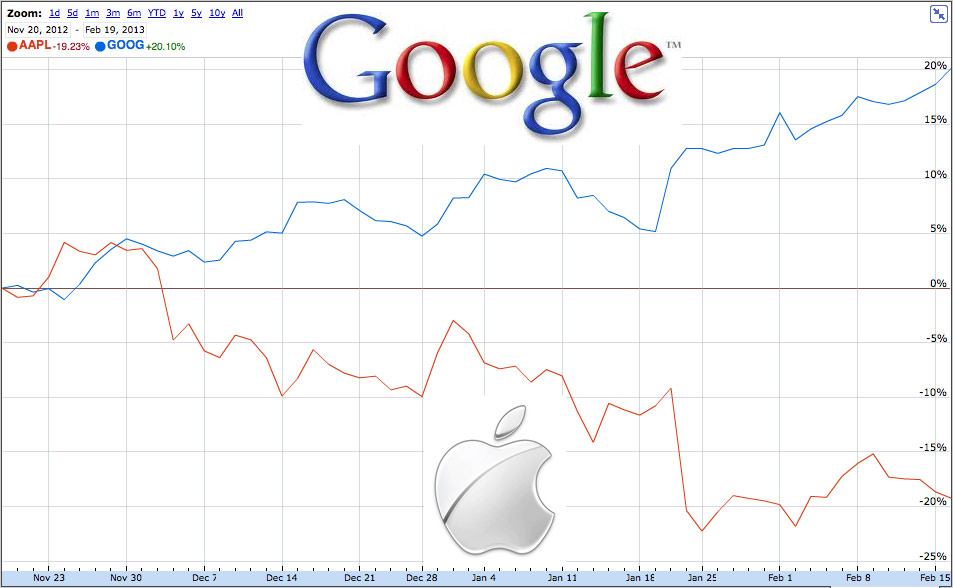 I do not think those two facts are unrelated.

To borrow a phrase from Gary V, Google is crushing it. The search/advertising/mobile giant had its first $50 billion year in 2012, and ended the fiscal year with a monster fourth quarter that was up 36 percent year-over-year. That’s not just big and not just an increase, it’s also an acceleration from Q4 2011 numbers, where were already up 25 percent from 2010.

But it’s been a long tough road for Google, in some ways. The undisputed search engine heavyweight champion of the world was long an investors’ darling, running up to $700 heights in December 2007, only to sink as low as $262 near the end of the following year. It was only returned to those rarefied heights in late 2012, and it has continued its slow but seemingly inexorable climb to the current $802.09.

Google’s primary product development focus as a company is driven by the masses of data that its search engine, advertising business, social network, and mobile operating systems generate. Iteration and innovation is driven by data on what people are doing with the tools. Apple’s innovation focus is on designing products with an overarching human ethic: software, hardware, and services melding into a single simple tool.

The difference could not be clearer than in Apple’s Maps fiasco: data was the difference.

The contrast in the last three months with its biggest mobile rival, Apple, could not be more stark. AAPL has shed hundreds of billions in value, and not even a Wall Street insider fireside chat with CEO Tim Cook helped: the stock dropped another two percent.

But stock price, unlike revenue, is not a trailing indicator. It’s a bet on the future. And analysts seem to believe that Android is going to eat Apple’s lunch (probably because 76 percent of Apple’s revenue is dependent on Android competitor iOS).

If that does happen, a bet on Google’s future is probably a good one. But the fat lady hasn’t sung quite yet.