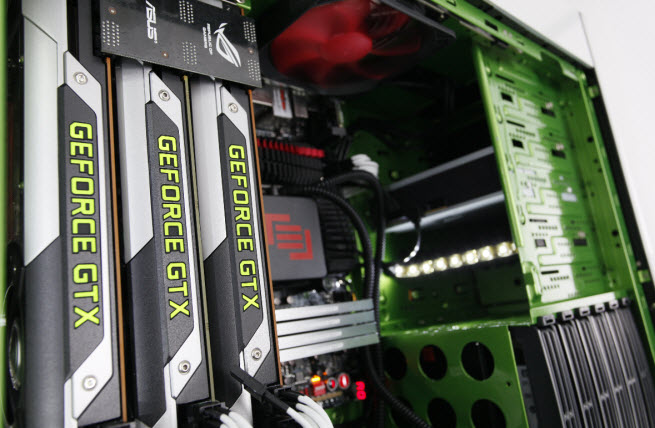 PC makers are announcing new gaming PCs today with Nvidia‘s new GeForce GTX Titan graphics chips and the cards that house them. The Titan graphics systems serve as the backbone of the world’s fastest supercomputer and they are now being released as the flagship chip in Nvidia’s graphics processing units for personal computers.

The new GeForce GTX Titan uses the same Nvidia Kepler architecture that powers the Oak Ridge National Laboratory’s Titan supercomputer, the No. 1 machine in the list of the Top500 supercomputers in the world.

“GeForce GTX Titan will allow us to create the nearly-impossible product our customers have wanted for years: a ridiculously fast, tiny system that you barely know is running,” said Kelt Reeves, CEO of PC maker Falcon Northwest.

PC makers will be able to put three Titan GPUs in three-way SLI mode in a single PC. Nvidia says that means “gamers can max out every visual setting without fear of a meltdown while playing any of the most demanding PC gaming titles. Nvidia keeps the chips from overheating by using high-efficiency vapor chamber cooling.

“GeForce GTX Titan is a beast of a GPU—and the only one in the world powerful enough to play any game at any resolution at any time,” said Scott Herkelman, general manager of the GeForce business unit at Nvidia. “And, yet, all of this immense power is housed in a sleek, sexy design, so gamers can also build beautifully-designed PC gaming machines about the size of a gaming console, yet magnitudes more powerful and always upgradeable.”

Titan chips have more than 7 billion transistors and 2,668 GPU cores, or 75 percent more than the company’s Nvidia GeForce GTX 680 GPU. It delivers 4.5 teraflops of single-precision and 1.3 teraflops of double-precision processing. The Titan GPU will be available on Feb. 25 from partners including Asus, EVGA, Colorful, Galaxy, Gigabyte, Inno 3D, MSI, Palit and Zotac. The price is $999.

Maingear’s new systems (pictured at top) include the Shift, F131, and Potenza desktops. The machines can support up to four monitors at the same time. Digital Storm, meanwhile, is introducing its Bolt gaming computer tha tis just 3.6 inches wide. That machine starts at $2,499.